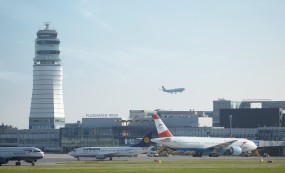 ·      GUIDANCE confirmed for 2016: increase in revenue to € 740 million and net profit for the period after non-controlling interests, clean, i.e. adjusted for Malta revaluation, to € 115 million, decline in net debt below € 400 million – traffic guidance for 2016 also confirmed

“The Flughafen Wien Group continued on its success path in the first quarter of 2016 thanks to a good business development, and supported by the required upward valuation of our stake in Malta Airport as a consequence of our increased shareholding. However, the serious crises unfortunately leave their mark on flight traffic, and enormously complicate the market environment for airlines and airports. Even if uncertainty is understandable in the light of terrorist attacks, flight traffic remains the safest means of transport, and people should not let their well-deserved vacation plans be spoiled by exaggerated fears”, explains Günther Ofner, Member of the Management Board of Flughafen Wien AG.

“The first three months of 2016 resulted in a higher passenger volume for Vienna Airport, supported by the leap day and the earlier Easter holidays. Numerous new flight offerings have already been confirmed for this year. The strong growth of the low cost segment at the Vienna hub is particularly noteworthy. Developments in recent months, such as the crisis situation in Russia, the events in Paris and Brussels and the related restrained booking behavior for several destinations such as Turkey, Greece, Egypt and Belgium impact the aviation sector in general and thus also affect Vienna Airport. Nevertheless, from today’s perspective we are optimistic to be able to fulfill our traffic forecasts for 2016”, says Julian Jäger, Member of the Management Board of Flughafen Wien AG.

Vienna Airport: Passenger growth in Q1/2016 despite a difficult market environment
Vienna Airport registered passenger growth of 2.3% from the previous year to 4,399,376 passengers in the period January to March 2016. The main driving forces were the strong growth of easyJet and Eurowings, which considerably expanded their presence at Vienna Airport. The number of local passengers rose by 4.3% in the first quarter of 2016, whereas the number of transfer passengers fell by 3.3%. Total passenger volume to Western Europe was up 3.9%, compared to the 6.7% decline in passenger traffic to Eastern Europe related to the crisis situation in Russia. The expanded flight offering and higher seat load factor led to a 1.1% rise in the number of passengers flying to Middle East destinations in the first quarter of 2016. The number of passengers flying to North America climbed sharply by 17.2%, which can be attributed to the resumption of flight service to Miami by Austrian Airlines. Passenger volume to the Far East fell by 1.6% due to capacity reductions, and passenger traffic to Africa was down 15.9% due to the politically instable situation in North Africa.

Strong increase in the free cash flow
The free cash flow climbed strongly to € 95.8 million. (up 606.7% from € 13.6 million in Q1/2015). Adjusted for the effect from the Malta consolidation, the clean free cash flow was    € 49.9 million (assumed cash and cash equivalents related to full consolidation) due to the payment from a finance lease agreement.

Revenue and earnings development in the segments
Due to the good traffic development, revenue of the Airport Segment rose by 4.3% in the first quarter of 2016 to € 74.0 million. Segment EBIT in Q1/2016 therefore improved to                  € 4.3 million (Q1/2015: € 1.7 million). The Handling Segment reported a 1.7% rise in revenue to € 35.8 million, generating EBIT of € 0.1 million (Q1/2015: € 1.7 million). This includes the security services provided by VIAS and the handling services of Vienna Aircraft Handling (VAH). The Retail & Properties Segment showed a revenue decline of 7.7% to € 28.5 million in the first quarter of 2016, which can be attributed to lower rental income as a consequence of a special effect (finance lease agreement), a positive one-off effect in the previous year and the restrained development of parking and retail revenue. EBIT of the Retail & Properties Segment amounted to € 15.5 million (Q1/2015: € 16.6 million). Revenue of the Other Segments rose by 19.0% to € 4.5 million, with segment EBIT up to € 56.4 million as the result of the revaluation of the stake held in Malta Airport. Moreover, with the closing of the transaction on March 30, 2016, the strategic investment in Malta Airport is now in the group of companies which are fully consolidated in the consolidated financial statements of the Flughafen Wien Group. For this reason, earnings starting in the second quarter of 2016 will be presented as the Malta Segment.

With respect to the acquisition of Group companies, in connection with Malta Airport, the following figures were included in the consolidated balance sheet on a preliminary basis:       € 61.3 million for goodwill, € 0.9 million for intangible assets and € 363.8 million for property, plant and equipment and investment property.

The report by Flughafen Wien AG of the first three months of 2016. from January 1 to March 31 2016 is available to the general public at the company’s offices at 1300 Flughafen Wien and at Bank Austria. 1010 Vienna, Schottengasse 6-8. It is also available on the Internet at http://viennaairport.com/en/company/investor_relations/publications_and_reports/
quarterly_reports