The location of third runway

The location of the planned third runway was determined following detailed mediated discussions. After in-depth consideration of the various development scenarios, the groups involved, including neighbouring communities and action groups, recognised that this was the most environmentally sensible solution. 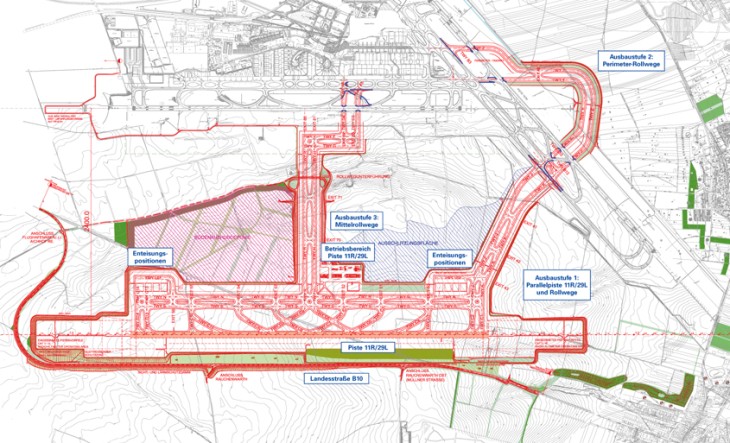 A project with 43 components

The project details fill twelve files. The component activities include adapting the site by redistributing the earth mass, building taxiways and roads, and installing flight safety equipment, lighting, marking and signposts. Water supply and waste water disposal systems and a snow storage site for the winter are also planned, along with power supply and communications. A number of buildings will also be needed: a third fire station, an additional fuelling depot, an aircraft de-icing station and a workshop. The B10 highway will have to be rerouted as well.

Because of capacity issues, the project will be completed in three phases, which will be scheduled as a function of air traffic developments.

The first phase will also be the most extensive. The site will need to be adapted before the runway can be built and the B10 highway diverted. The 11R/29L runway and taxiway system will be built and connected to runway 16/34. Like the other areas where aircraft move at the airport, the third runway will need a drainage system. Contaminated waste water will be treated in a purification plant, while non-contaminated water will be drained directly into the Danube via a new outlet pipe. All of the buildings connected with the third runway will also be constructed during the first phase along with the flight safety installations for CAT III operation. Internal roads, infrastructural measures and a public path to Katharinenhof from the B10 are planned in addition. At the same time, noise and privacy protection measures, and clearance, planting and landscape design work will be carried out.

The second phase will involve the two perimeter taxiways for separate crossing of the existing runway 11L/29R. Extensive additional measures will be required here, too (e.g. noise and privacy protection, and clearance, planting and landscape design work).

The third and last phase will consist of the construction of the central taxiway crossing the existing runway 11/29 (which will then be called 11L/29R). The internal roads to the airport buildings will also be lengthened. A road tunnel underneath the taxiway will be built to provide access to Katharinenhof. Other adaptation and drainage measures are also planned. 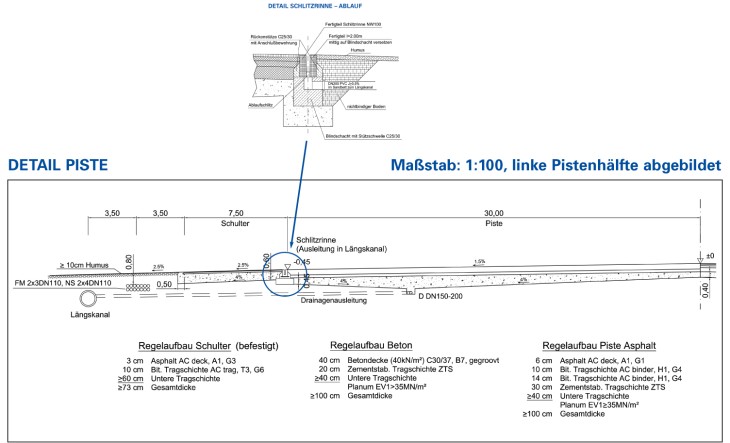 Like normal roads, runways also require a multilayer foundation to ensure that they can withstand the weight of over one hundred fully laden aircraft every day. An A321-200, for example, weighs as much as 89 tons. The threshold - an area of 707 metres in length at either end of the runway where the aircraft wait to take off or stop on landing - will be made of concrete. This will prevent surface deformation. The larger section of the runaway - 2,266 of the 3,680 metres - will have an asphalt surface. On either side of the runway itself there will be a 7.5 metre paved shoulder. To enable rainwater to drain off evenly on both sides, the runway and shoulders, which will total 60 metres in width, will be constructed with a 1.50 per cent camber.

Other buildings and facilities will be required for the operation of the new runway and taxiways. Most will be situated in a common area in the centre of the runway. These new facilities are required for safety reasons - to enable the fire brigade to deploy as quickly as possible - and on account of operating considerations:

The buildings and facilities will be located so that the distances for deployment are as short as possible.