Cookie information
To ensure the best service on this website we use cookies to analyse the behavior of our users. E.g. what language your browsers uses, what device you use to visit this site or how often you visit this website. By clicking OK you agree to our usage of cookies and webtracking tools (e.g. Google analytics, Sizmek Adserver).
More information available here:
Data protection policy
OK

The carbon footprint is measured annually so as to monitor developments and trends and to introduce measures to reduce emissions. The assay carried out by Laboratorium für Umweltanalytik is based on data from 2013 and takes account of all sources within the airport—air traffic, aircraft handling, stationary and infrastructure-related sources, and landside traffic. The carbon footprint for all these sources is divided into three areas in accordance with international norms: emissions for business activities, waste disposal, and outside companies, with distinctions being made between direct and indirect controllability.

Air traffic accounts for 76 per cent of carbon dioxide emissions and is the largest source. Of this amount, 13 per cent, mostly in connection with energy supply, can be directly controlled by Flughafen Wien AG. Carbon dioxide emissions in 2013 totalled 308,169 tons, equivalent to 1.3 per cent of the total or Vienna and Lower Austria, and 0.5 per cent for the country as a whole. 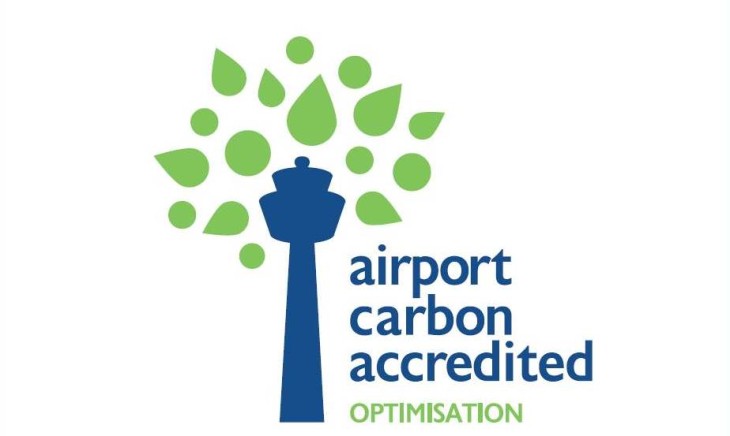 Further information on the programme can be found at  http://www.airportcarbonaccreditation.org.

The Vienna Airport vehicle pool is gradually being converted to environmentally friendly natural gas. It already has the largest fleets of this type in Austria. Apart from positive effects on the environment through the reduction of CO2 and NOx emissions, the natural-gas caddies emit up to 30 per cent less CO2, 85 per cent less nitrogen oxides, and 90 per cent less carbon monoxide than petrol engines. There are no sulphur dioxide or soot particles as in diesel engines. Natural-gas vehicles are also more economical because of the lower consumption costs. The natural-gas filling station set up by Vienna Airport is also available to outside vehicles.

Energy efficiency is an example of Vienna Airport’s responsible attitude to energy management. The energy efficiency team is always on the lookout for savings potential so as to lowering operating costs for the company as a whole. This can be achieved, for example, by reducing the lighting in unnecessarily brightly lit areas to the statutory minimum. Lighting airside is used only where it is really necessary. LED technology for runways and taxiways not only reduces energy costs but also requires less maintenance while improving visibility at the same time. The old pumps in the refrigeration centres have been replaced by modern machinery, and the air conditioning in the elevator servicing areas has been improved. Annual operating costs will continue to be reduced through further energy-efficient economy measures based on the latest environmental and technological findings. All of these measures bring about discernible reductions in energy.

A 4,300-metre district heating system from Schwechat refinery with two pipelines provides Vienna Airport with environmentally friendly heat. Water is heated to 170 degrees in the refinery, pumped to the airport, where it gives off its heat before being returned to the refinery at around 90 degrees. District heating is environmentally sound with 50 per cent less fuel consumption and CO2 emissions than heating oil.

air and pollution measurements at the airport

The air quality measurement point at Vienna Airport is to the east of the intersection of the two runways.

Thanks to its position (in the main wind direction) it can measure ground emissions for all take-offs and landings and for all airside and landside ground transport.

According to measures to date, the air quality at Vienna Airport is similar to that on the outskirts of a large city with low carbon monoxide, sulphur dioxide, dust, benzene and heavy metal content, and moderate nitrogen oxide pollution.

The Vienna Airport eco-model focuses on avoidance, reduction and recycling. The less waste produced, the less that needs to be sorted and disposed of. Waste is sorted in accordance with strict guidelines, making recycling easier and less expensive. All possibilities for efficient waste management are exploited. This is no easy undertaking, since there is not only aircraft, catering and industrial waste to deal with but also different types of hazardous waste. Biogenic waste, glass and plastic bottles are collected separately for recycling. Special environmental islands are also available in the terminal areas for passengers to sort and dispose of their waste.

As Vienna Airport has grown in size, the amount of wastewater to be disposed of has also increased from year to year. The complete canalisation of the sealed airside areas is a central aspect of the water drainage project. From the individual airport catchment areas—all runways, aprons, and taxiways, over 2.4 million square metres in total—rainwater drains into the central wastewater disposal system. The water pollution is measured online at the main collection point so that a decision can be made as to its further treatment. If it is not polluted it is discharged directly into the Danube and Schwechat draining channel. The amounts handled by the Schwechat treatment plant have been reduced through the separation of polluted and non-polluted wastewater. The current drainage system complies with all official regulations.

The rainwater and communal wastewater on the airport site are separated into communal surface water, wastewater and aircraft de-icing water and conveyed to the Schwechat-Mannswörth treatment plant (VKA).

The completely biodegradable glycol mixtures have a higher contaminant content than communal wastewater. The water at the de-icing stations is therefore drained separately and introduced slowly into the wastewater. The surface water there is also collected separately and drained into an intermediate underground collection tank, since it cannot be transferred in large batches to the Schwechat treatment plant.