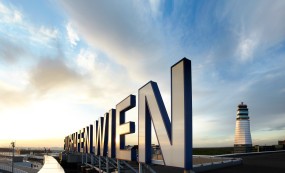 
“Vienna Airport is expanding in all areas. Revenue and earnings increased considerably, the Airport City is growing, and we are making extensive investments in modernising the infrastructure. However, we are growing in a responsible manner. Since 2011 we have succeeded in reducing CO2 emissions by about 70% per traffic unit and energy consumption by 40%. Vienna Airport will be CO2 neutral by the year 2030, in spite of further growth in flight traffic and at the flight hub”, explains Günther Ofner, Member of the Management Board of Flughafen Wien AG.

“The growth trend at Vienna Airport is continuing. We registered a 22.4% rise in the number of passengers handled in the period January to July 2019, and we are heading towards a new all-time high in the summer. Accordingly, we are the top performer in Europe and the fastest growing airport in our category. The number of flight movements also increased sharply by 14.9% since January. 2019 will turn out to be a record year in the airport’s history in terms of passenger volume and will likely reach the level of about 31 million travellers. This strengthens the entire business and tourism location”, states Julian Jäger, Member of the Management Board of Flughafen Wien AG.

Good traffic development in H1/2019: +19.9% rise in passenger volume in the Flughafen Wien Group2
The Flughafen Wien Group including the foreign strategic investments in Malta Airport and Kosice Airport handled a total of 18.1 million passengers in the period January to June 2019, comprising a year-on-year rise of 19.9% from the prior-year level. The number of passengers at Vienna Airport climbed 23.9% to 14,666,255 travellers in the months of January to June 2019. The number of local passengers was up 29.1% in the first half of 2019, whereas transfer passenger traffic rose by 6.9%. The number of flight movements in the period January-June 2019 was up 15.4% from the previous year to 127,883 starts and landings. The average seat occupancy (seat load factor) rose slightly from 73.8% to 75.1% in the first six months of 2019. Cargo volume (air cargo and trucking) fell by 4.6% in the same period to 135,984 tonnes. Passenger traffic at Malta Airport increased by 5.9% to 3,251,859 passengers in H1/2019. Passenger volume at Kosice Airport rose by 2.5% in the same period to 218,049 passengers.


Vienna Airport is the top performer in Europe
According to the global airport association Airports Council International (ACI), European airports reported an average passenger growth of 4.3% in the first half of 2019. Vienna Airport’s growth performed significantly better, showing the strongest growth in H1/2019 of all European airports with more than 25 million passengers.

Investments
Total investments in the first six months of 2019 amounted to € 63.5 million, with the largest investments relating to Office Park 4 with € 14.3 million followed by investments of
€ 8.2 million for Hangars 8 and 9 and € 5.7 million for terminal development projects. A total of € 7.0 million was invested at Malta Airport in the first half of 2019.

Traffic development in July 2019:
Flughafen Wien Group handles 4.1 million passengers (+13.4%)
The number of passengers handled by Vienna Airport in the month of July 2019 rose by 13.4% compared to the prior-year month to 4.1 million travellers. Passenger volume on a cumulative basis for the period January to July 2019 was up 18.7% to 22.2 million travellers. Vienna Airport also developed well, reporting a 22.4% rise in the number of passengers it handled from January to July 2019 to a total of 17,827,655.

Malta Airport reported a strong increase in passenger volume of 5.6%. Kosice Airport registered a rise of 7.1% in the number of passengers it handled.

Improved passenger and earnings forecast for 2019
Due to the good traffic development, Flughafen Wien AG is revising its forecast for the entire year 2019 upwards, and now expects passenger growth of over 10% in the Group and substantially higher than 10% for Vienna Airport to about 31 million travellers. With respect to the financial guidance, Vienna Airport anticipates revenue clearly above € 830 million, EBITDA perceptibly higher than € 375 million and a net profit for the period before non-controlling interests noticeably above the level of € 170 million.


The report by Flughafen Wien AG for the first six months of 2019, from January 1 to June 30, 2019, is available to the general public at the company’s offices at 1300 Flughafen Wien and at Bank Austria, 1020 Vienna, Rothschildplatz 1.It is also available on the Internet at
http://viennaairport.com/en/company/investor_relations/publications_and_reports/
quarterly_reports.