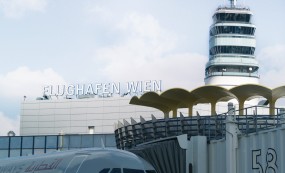 The number of passengers handled by Vienna Airport in October 2015 fell slightly by 0.3% from the comparable level of October 2014 to a total of 2,033,802. The number of local passengers in October 2015 rose by 2.0% from the previous year, whereas the total volume of transfer passengers was down by 5.3% in a year-on-year comparison. This decrease was due to the crisis situation in Russia and capacity reductions carried out by the airlines. The number of flight movements (starts and landings) decreased by 3.1%. In contrast, there was a slightly positive development in the maximum take-off weight (MTOW), which increased by 0.2%. Total cargo volume was down 4.4% in October 2015 compared to the prior-year level. Cumulative passenger volume in the months January to October 2015 was up 1.4% from the previous year.

The number of passengers flying to Western Europe rose by 1.1% in the individual month of October 2015, whereas passenger traffic to Eastern Europe fell by 2.9%, which is related to the crisis situation in Russia, amongst other factors. Passenger volume to the Middle East and Far East also dropped by 0.6% and 2.0% respectively. Vienna Airport showed passenger growth of 6.0% to North American destinations. In October 2015 the number of passengers flying to Africa was down by 5.7% from the previous year.

Good development of strategic investments in Malta and Kosice
The foreign strategic investments of the Flughafen Wien Group developed well. Malta Airport reported cumulative passenger growth of 7.4% from January to October, with passenger volume up to more than 4.1 million passengers in the first ten months of the year. Kosice Airport handled a total of 358,050 passengers, comprising a rise of 11.7% in the same period.