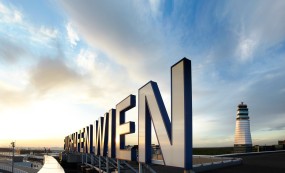 
The year 2019 was characterised by strong passenger growth. 39.5 million travellers (+15.0%) were registered by the Flughafen Wien Group (Vienna Airport and the foreign strategic investments in Malta Airport and Kosice Airport). Vienna Airport itself handled a total of 31.7 million passengers (+17.1%), comprising a new all-time high. The growth curve will likely flatten out in 2020, but the outlook continues to be positive. The Flughafen Wien Group expects a 3-4% rise in passenger volume along with an increase in revenue, EBITDA and the net profit. The total number of passengers at Vienna Airport is anticipated to climb by 3-5% in the year 2020.

The higher level of capacity utilisation at Vienna Airport means that no further slots will be available in peak periods starting in 2020. Accordingly, only very restrained growth will be possible in the future.

2019: More than 31 million passengers in Vienna, approx. 40 million in the Flughafen Wien Group
“Vienna Airport handled more than 31 million passengers in 2019 for the very first time. As a result, we rank among the 20 biggest airports in Europe. Following the discontinuation of operations by the Air Berlin Group, the catch-up effect on the part of low-cost carriers which has lasted since 2018 will level off somewhat. We anticipate a significantly lower passenger growth rate of 3-5% in Vienna. In spite of the higher number of passengers, we succeeded in improving punctuality in collaboration with Austrian Airlines. Vienna was the third most punctual airport of its class in Europe in 2019, and 15th in the world. This shows that our quality enhancement measures are having a positive impact, and we are resolutely moving ahead with our efforts to become a 5-Star Airport. Our terminal development programme is an essential element in this regard and is already well under way. The modernised Terminal 2 will open at the end of 2020 and starting in 2023 the modernised Pier East and the new Southern Enlargement project will offer passengers a new, high-quality experience for them to linger, shop and eat”, explains Julian Jäger, Member of the Management Board of Flughafen Wien AG.

Higher dividend, revenue and net profit, Vienna Airport will become CO2 neutral
“2019 was a strong year for Flughafen Wien AG. Shareholders and employees can expect a considerable dividend increase with a higher payout ratio of 60%. Despite the weaker growth in flight traffic in 2020, we expect revenue to climb to more than € 870 million and the net profit to increase to more than € 180 million. Vienna Airport continues to develop very favourably, and the Airport City is expanding. The new Office Park 4 with more than 26,000 m² of office space will commence operations in May 2020, and the interest in the airport as a business location remains high. This year about 25,000 people will be employed at the airport site. The airport is growing in a responsible manner. In 2019, we further reduced energy consumption per passenger by more than 20% and also succeeded in cutting back on CO2 emissions. A large-scale photovoltaic initiative will be launched starting in 2020, when more than three million kilowatts of electricity will already be generated. The airport plans a ten-fold increase in photovoltaic power generation in the coming years to about 30 million kWh. Vienna Airport will also be CO2 neutral before the year 2030. Our objective is a clear one i.e. to become the leading green airport in all of Europe”.

“We expect positive impetus from the new government programme, above all thanks to the announced decline in the corporate tax rate, the expansion of railway connections to Bratislava and the commitment to a unified European airspace (Single European Sky). This should more than compensate for the negative effects of the higher ticket tax”, states Günther Ofner, Member of the Management Board of Flughafen Wien AG.

31.7 million passengers (+17.1%) at Vienna Airport
For the first time in its history, Vienna Airport surpassed the threshold of 31 million passengers, recording a total of 31,662,189 passengers in 2019. This comprises a year-on-year increase of 17.1%. In particular, long-haul routes had a positive impact on the airport’s performance, along with new flight connections and frequency increases on the part of the airlines. Passenger volume in transfer traffic and (+7.6%) and the number of local passengers (+20.0%) developed positively. Similarly, the number of starts and landings rose by 10.7%, and capacity utilisation of the aircraft (seat load factor) climbed by 1.3 percentage points to 77.3%. Cargo volume showed a downward development, falling by 3.9% in the year 2019.

Higher passenger volume to Western and Eastern Europe, North America, Africa, the Middle East and Asia
The number of passengers departing for Eastern European and Western European destinations showed a substantial increase in 2019, rising by 21.6% and 15.3% respectively. Passenger volume to North America climbed by 30.3%. The number of passengers flying to destinations in the Far East was up by 13.7%, and passenger traffic to the Middle East rose by 16.3%. The number of travellers to Africa also increased, climbing by 22.3%.

77 airlines serve 217 destinations in 68 countries
In the ranking of airlines as measured by their share of overall passenger volume, Austrian Airlines was in the number one position with a share of 43.2%, followed by Lauda with 8.4% and Eurowings with 7.2%, Wizz Air at 6.6% of the total number of passengers and easyJet with 3.9%, Lufthansa with 2.3% and LEVEL with 1.9%. The top ten airlines at Vienna Airport in 2019 also included Turkish Airlines, accounting for a 1.7% share of total passenger volume, along with British Airways at 1.4% and SWISS, with a 1.4% share of passenger traffic. In 2019 Vienna Airport was regularly served by a total of 77 airlines, offering flight service to 217 destinations in 68 countries.

Good development of international strategic investments
Malta Airport reported record traffic results in 2019, handling a total of 7,310,289 passengers, representing a year-on-year increase of 7.4%. Kosice Airport registered a passenger volume of 555,325 travellers in 2019, up 2.9% from the previous year.

Forecast for passenger development: 3-4% passenger growth in the Flughafen Wien Group
Vienna Airport is expected to generate passenger growth of about 3-5% in 2020. From today’s perspective, initial impetus to growth is likely to be provided by the launch off light service to Boston by Austrian Airlines, and new short-haul and medium-haul flight connections offered by Belavia, Lauda, Wizz Air and other airlines.

Financial guidance 2020 for the Flughafen Wien Group: Higher revenue, EBITDA and net profit
Total revenue of the Flughafen Wien Group in 2020 is expected to rise to more than € 870 million, with EBITDA anticipated to exceed € 395 million. From today’s perspective, the consolidated net profit after tax should amount to at least € 180 million. Investments of approx. € 230 million are planned in the year 2020.


VIE-Results in detail: Traffic development in 2019:


Number of departing passengers per region


Top destinations per region and number of departing passengers

Traffic forecast and financial guidance for 2020: