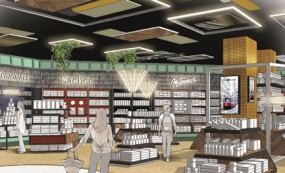 The world-famous Sacher Cake belongs just as much to Vienna as St. Stephan’s Cathedral. Within the context of extending their partnership, the travel retail distributor Gebr. Heinemann and Vienna Airport have defined the goal of proactively putting even greater emphasis on regionality in the airport’s shopping and restaurant areas. This will be achieved by a new shop-in-shop concept, amongst other measures, featuring even more highlighted sales space for typical national products and brands such as “Sacher”. In part, Heinemann will redesign or expand its existing shops. A key aspect of the agreement relates to the “Southern Enlargement” project for Terminal 3. The total sales area occupied by the family-owned company will increase from about 4,000 m² at present to approx. 5,700 m².

“When entering the premises, passengers should immediately notice that they are at Vienna Airport. Together with our longstanding partner Heinemann, we want to bring Austria and more specifically Vienna closer to people in our shopping and restaurant area in a particularly tasteful and friendly manner“, says Julian Jäger, Member of the Management Board of Flughafen Wien AG, who is pleased with the continuation of the cooperation with the Hamburg-based global player.

“I am also very delighted with the extension of our joint work, because it not only underlines the confidence of our partner in us, but also reflects the success of our business and our Heinemann brand at Vienna Airport”, states Raoul Spanger, Chief Operating Officer at Gebr. Heinemann. “It has always been our strength to perfectly implement the regional focus of a location in our shops, and we look forward to once again creating this local footprint in Terminal 3 within the context of the southern extension”.

Airport with Viennese charm
The new concept will be reflected at all Heinemann stores at Vienna Airport, and will primarily play an important role in the southern extension of Terminal 3. The most well-known brands such as Sacher, with the original Sacher cake only sold at Vienna Airport by Heinemann as the exclusive partner should become even more experienceable for customers along with brands such as Manner, Mirabell and Schlumberger. Replicas of individual elements of well-known sights should ensure that special “Viennese touch” in the interior and the design.  For example, reminiscences of the famous Vienna Naschmarkt outdoor market including the use of typical wooden crates should be evoked to present Austrian specialities.

About Gebr. Heinemann SE & Co. KG
Gebr. Heinemann is one of the most important players on the international travel market. The company is the market leader in Europe and is the only family-owned company among the global players in the industry. As a distributor, the company supplies more 1,000 customers in over 100 countries. In the retail sector, Gebr. Heinemann operates more than 340 Heinemann Duty Free & Travel Value Shops, fashion label boutiques under license and concept stores at 74 airports in 28 countries along with shops at border crossings and aboard cruise liners. The family-managed company has developed a brand concept to give its Duty Free & Travel Value shops an unmistakable identity. The Heinemann Duty Free brand is present at numerous airports worldwide and operates its biggest Duty Free shop at Sydney Airport.

Gebr. Heinemann serves more than 40 million retail customers annually at its shops covering an area of 160,000 square metres. The family business has been headquartered since 1879 in the area that has become the HafenCity in Hamburg, Germany. It is managed in the fourth and fifth generation by the cousins Claus and Gunnar Heinemann as well as Gunnar Heinemann’s son and CEO Max Heinemann. More than 8,000 people are employed across the globe by Gebr. Heinemann. The company generated a controlled Group turnover of EUR 4.6 billion in the year 2018.