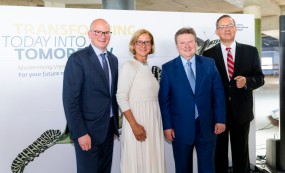 More Space and More Quality for Travellers: Ground-Breaking Ceremony for Large-Scale Terminal Modernisation Investments: Vienna Airport on the Path Towards a 5th Star

A major investment of about € 500 million is for the renovation of Terminal 2 and the Pier East and construction of a large additional building, the “T3 Southern Enlargement” with 70.000 square meters.

Vienna Airport will be a construction site for four years, but will then shine in new splendour.

The advantages for passengers: greater comfort in travelling, a new central security checkpoint, an additional baggage claim area, more space at the gates and attractive new shopping and food and beverage offerings

“Reliability and comfort are essential to ensure passenger satisfaction, above all when passenger development is booming as much as it is at Vienna Airport at present. Quality and security are the top priorities for us. The large-scale investments are designed to make the terminal landscape more attractive and comfortable, and our passengers will experience a completely new quality during their stay. However, Vienna Airport will be a big construction site until it shines in new splendour in the year 2023 and hopefully earns the 5-Star Airport Rating. We would already like to ask for the understanding of our passengers and customers”, explain Julian Jäger and Günther Ofner, Members of the Management Board of Flughafen Wien AG.

“The terminal modernisation and expansion at Vienna Airport represent a logical step forward to optimally leverage existing growth and future perspectives. Above all, further important investments will be made in the light of the 3rd Runway project. I am convinced that the planned investments comprise the right measures to further strengthen the airport’s significance as an important international flight hub in the Eastern Region of Austria”, says Johanna Mikl-Leitner, Governor of the Federal Province of Lower Austria.

“Vienna is one of the world’s most popular tourism destinations, and overnight stays are steadily increasing. More than half of our guests come by plane, and thus Vienna Airport is an important business card for the city. The beauty of the city, its tradition and culture are reflected in the planned terminal modernisation and expansion measures. Today Vienna Airport is already an important flight hub for the entire economic and tourism location of Vienna. Thanks to the planned investments, the airport is laying crucial foundations for the future”, states Michael Ludwig, Mayor of the City of Vienna.

Terminal 2: Central security checkpoint and additional baggage carousels
The starting point is the modernisation of the entire building infrastructure of Terminal 2. Accordingly, walls, floors and lighting will be upgraded, and the roof construction will be renovated. Terminal 2 constructed in the 1960s is one of the oldest buildings at the airport site. Located between Terminals 1 and 3, Terminal 2 will play an important role in future airport operations. From there passengers can gain access to the shopping and F&B facilities in the back as well as the border control and B, C and D gates via the new central security checkpoint. A separate baggage claim area with three baggage carousels will be created for passengers arriving there. From today’s perspective, the new Terminal 2 is scheduled to come on stream by the end of 2020.

New Pier East: Spacious gate areas and comfortable quality of stay
Pier East with its D-gates will also be comprehensively modernised. In the future passengers will enjoy spacious leisure and waiting areas featuring a high-quality shopping and food and beverage offerings. The former partition walls as well as the decentralised security screening will be removed. Adaptation work in the Pier East is scheduled for the beginning of 2021. Passenger traffic will be redirected to other gate areas during construction work, which is planned to be concluded at the beginning of 2023 when the newly designed Pier East is put into operation.

New, additional building “T3 Southern Enlargement”: 70,000 m² of leisure areas and Non-Schengen connections
The core element of the airport’s terminal development programme is the planned “Southern Enlargement”. Comfortable leisure and lounge areas, additional bus gates and numerous new spaces for shopping and food & beverage facilities with more than 30 new outlets will be created in a new separate building covering an area of about 70,000 m². Particular emphasis will be placed on Austrian food and local brands. The most well-known restaurants in Vienna and in Austria should be represented here. In order to find the right partners, Vienna Airport will begin the tender process in the beginning of 2020. The new building also enables convenient transfer between the F-, G- and D-gates. The central security screening from Terminal 3 will be located in the new T3 Southern Enlargement in the future. Accordingly, more leisure areas will be made available in Terminal 3. Construction work is scheduled to begin in the middle of 2020. The new southern section is expected to be put into operation in the middle of 2023.

Enhancement of passenger quality and overall profitability of the company
The terminal development programme will significantly improve the quality of a passenger’s stay and service experience at the airport. After being granted the 4-Star Airport Rating by Skytrax in the year 2015, Vienna Airport is now pursuing the clear objective of becoming the next 5-Star Airport in Europe on the basis of its planned modernisation and expansion measures. The Supervisory Board resolved upon a budget of € 500 million for the entire terminal development project. The extensive expansion of the shopping and F&B offering will significantly increase the profitability of the airport operating company Flughafen Wien AG.

Sustainability – others talk, Vienna Airport acts
Sustainability and energy efficiency are key elements of the terminal development projects. The new southern section will be constructed on activated bored piles, in which case geothermal energy will be used. State-of-the-art solutions in the field of building services engineering, optimised thermal insulation and a modern facade design will be implemented. The projects will be provided with support on air conditioning and energy issues by the Vienna University of Technology throughout the entire planning and construction phases. The airport’s sustainability strategy is not limited to mere rhetoric but has led to concrete  achievements. Since 2012, total CO2 emissions (per passenger) have been reduced by about 70% whereas electricity consumption has declined by more than 40% in this period.