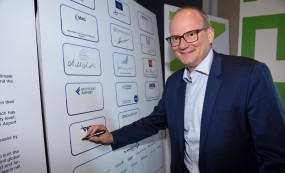 In the future Vienna Airport will hold a leading position in the European aviation association Airports Council International (ACI): on June 27, 2019, Julian Jäger, Member of the Management Board of Flughafen Wien AG, was elected to the Board of Directors of ACI Europe for the first time at its Annual Assembly & Congress in Limassol, Cyprus.

“Aviation is a global system. Events at one destination quickly affect other airport sites, and the entire industry feels the impact of global economic and security developments. However, the issue of how aviation can do its share to reduce CO2 emissions is at the top of the agenda. The combined efforts of airports in Europe plays an important role here. Accordingly, ACI launched an important initiative to reduce CO2 emissions of airports thanks to its Airport Carbon Accreditation. At present, 194 airports have resolved to become completely CO2 neutral by the year 2050. Vienna Airport has committed itself to this resolution and will achieve this goal earlier”, explains Julian Jäger, Member of the Management Board of the Vienna Airport operating company Flughafen Wien AG.

194 airports cut emissions by 3.46 million tonnes of CO2 annually by 2050
Within the context of the ACI Annual Assembly & Congress, a total of 194 airports signed a resolution committing themselves to climate neutral operations by the year 2050. More specifically, the target is net zero emissions, which means that CO2 neutrality is achieved without offsetting measures, for example the purchase of emission certificates. This measure corresponds to an annual reduction of 3.46 million tons of CO2. In addition to Stockholm Arlanda, Hamburg Airport, Amsterdam Schiphol, Copenhagen Airport and many others, Vienna Airport has also agreed to put this commitment into practice.

ACI: Association of all global and European airports
Airports Council International (ACI) is the association representing all global airports. The European offshoot ACI Europe encompasses more than 500 airports in 45 European countries with a total annual passenger volume of more than two billion people. Together, the member airports generate revenue in excess of EUR 675 billion annually and thus contribute 4.1% of Europe’s gross domestic product. On the basis of its different programmes and initiatives, ACI Europe contributes towards improving quality, safety and climate protection.