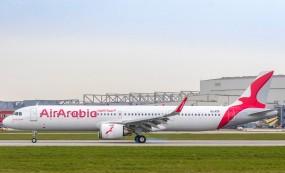 Air Arabia Heads Towards Vienna: Vienna Airport Directly Connected with Sharjah in the United Arab Emirates in the Future

An even more extensive flight offering from Vienna will exist starting on September 15, 2019, when Air Arabia launches a new direct flight connection to Vienna. The low-cost airline will link Vienna Airport with Sharjah, the third largest city in the United Arab Emirates. Initially four weekly flights will be operated, which will be expanded to daily flight service as of the middle of December. The airline already serves the Vienna-Marrakech route via its subsidiary Air Arabia Maroc.
“With Air Arabia the largest low-cost carrier of the United Arab Emirates has come to Vienna. Passenger growth to the Middle East has risen 20% since the beginning of the year. The new flight connection to Sharjah, the home flight hub of Air Arabia, serves as the basis for serving this region in the future even more effectively from Vienna”, says Julian Jäger, Joint CEO and COO of Vienna Airport.

“In 2018 Vienna attracted about 350,000 overnight stays from the Arab world. Vienna is a well-established brand there. The new direct flight connection on the part of Air Arabia is an important strategic milestone in the market development of the Vienna Tourist Board, and helps us to open a new chapter in this success story”, explains Norbert Kettner, Managing Director of the Vienna Tourist Board.

Sharjah is the third largest city in the United Arab Emirates and is located directly next to Dubai on the Persian Gulf. In addition to heavenly beaches, this destination offers visitors a particularly extensive offering of culture and was even named the Cultural Capital of the Arab World by UNESCO in 1998 thanks to its numerous mosques, palaces, museums and historic old town. Every two years the city organizes one of the biggest art events in the United Arab Emirates, namely the Sharjah Biennial. More than 60 international artists exhibited their works there in the year 2019.

Direct flight from Vienna to Sharjah in six hours
For the time being, Air Arabia will operate the new direct flight four times per week. The aircraft will take off from Vienna every Wednesday, Friday, Saturday and Sunday. The airline will increase frequencies on this route to one daily flight in the middle of December 2019. Air Arabia has already been offering direct flights from Vienna to Morocco via its subsidiary Air Arabia Maroc since October 2018.

About Air Arabia
Air Arabia is the leading low-cost airline in the Middle East and is publicly traded on the Dubai Financial Market. Air Arabia commenced operations in the year 2003 and currently operates a fleet of 54 new Airbus A320 and A321 aircraft. The airline serves 170 destinations from four flight hubs located in the United Arab Emirates, Morocco and Egypt. The multiple award-winning airline offers travellers a lot of comfort, reliability and affordable air fares. Interested people can obtain further information at www.airarabia.com.