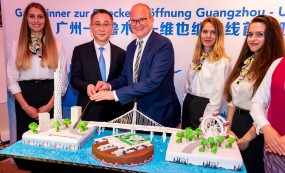 China Southern Airlines, the largest airline in Asia, now offers flights to Vienna, and 150 industry guests as well as Vienna Airport welcomed them within the context of an Austrian-Chinese gala evening in the State Hall of the Austrian National Library. Julian Jäger (Joint CEO and COO of Vienna Airport) and Han Wensheng (COO of China Southern Airlines) underlined the significance of the new route for both countries. Vienna Airport dedicated a book sponsorship for three works written by the Austrian sinologist Arthur von Rosthorn on this special occasion commemorated in the historical premises.  Musical performances by opera singer Clemens Unterreiner and a traditional piece of music from China on the flute ensured inspiring moments.

Julian Jäger, Joint CEO and COO of Vienna Airport, officially welcomed the airline to Vienna. “We are very pleased to welcome China Southern Airlines with a direct flight connection. The new route sets an important milestone and strengthens tourism and economic ties between Austria and China. Flight connections to China rank among the most popular ones within the long-haul offering from Vienna Airport. Two destinations, Urumqi and Guangzhou, located in important regions in China, are conveniently accessible effectively immediately.”

Han Wensheng, COO of China Southern Airlines, adds: “The successful start of flight service on the Guangzhou-Ürümqi-Vienna route is a courageous and exciting step in order to develop China Southern into an international, network-oriented airline. This new route will considerably promote the cooperation of China and Austria in the fields of business, trade, tourism, culture and other areas as well. It will also improve connectivity on the route and facilitate the exchange and collaboration between China and Austria’s neighbours, including Germany, Switzerland, France and Italy. All our efforts serve the purpose of driving development and prosperity in China and Europe, the world’s two largest economies, and will make a major contribution to the Belt and Road Initiative.”

Book sponsorship of Vienna Airport given to China Southern Airlines
The Austrian National Library, a special historical location, was chosen as the event space for yesterday’s gala evening. Vienna Airport dedicated a book sponsorship to the airline within the context of event last night. It chose three works, including “Geschichte Chinas” (The History of China) by Arthur von Rosthorn. The Austrian sinologist and diplomat travelled on a ship to China for the customs service, got to know the country well, was appointed to the position of embassy counsellor and even taught sinology at the University of Vienna afterwards.  He stood up for China’s interests and for Chinese culture, and later wrote his memoirs about China. The inscription will remain immortalised in his three works and can be viewed in the Austrian National Library. In addition to the impressive backdrop, the musical performances of opera singer

and baritone Clemens Unterreiner, member of the ensemble of the Vienna State Opera, as well as of two Chinese artists also ensured inspiring moments. More than 150 guests from business, tourism and culture welcomed the Chinese airline to Vienna during an event moderated by Sonja Kato-Mailath-Pokorny.

China Southern Airlines – Asia’s largest airline
China Southern, the largest airline in Asia and one of the biggest in the world (with respect to the size of its fleet) has an impressive fleet of 820 Boeing and Airbus aircraft. The Chinese airline operates more than 3,000 flights each day to 224 destinations in 40 countries and transported more than 139 million passengers in 2018. On June 15, 2018, China Southern Airlines was given the “2-Star Flight Safety Diamond Award” of the Civil Aviation Administration of China (CAAC) and was thus designated as China’s safest airline. Moreover, the renowned market research institute Skytrax bestowed its 4-Star Airline Rating on the Chinese airline. For further information on China Southern Airlines, visit the Website www.csair.com/en or contact the representative office in Austria.