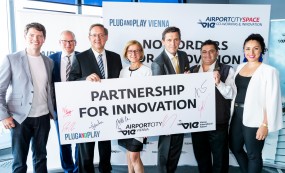 Silicon Valley lands at the airport:
Vienna Airport Becomes a “Founding Partner” for the Startup Accelerator Plug and Play of California and thus an Innovation Hub

The global player “Plug and Play” which spawned the likes of Google, PayPal and Dropbox, is setting up a “startup hub” at the Airport City Vienna for innovative business ideas.

The future competitiveness of the business location strongly depends on good development opportunities for startups and company founders. In this regard Austria has to position itself better. The launch of Plug and Play at Vienna Airport comprises a strong signal to stimulate the startup scene and offers great new opportunities for startups themselves as well as for established companies. The latter can serve as partners providing financial and ideational support and at the same time enormously benefit from the ideas of the founders and developers. Plug and Play has longstanding experience and is active across the globe. As a result, it offers participating founders and companies direct access to global know-how and thus a decisive advantage vis-à-vis other, more locally-based initiatives.

Plug and Play in the Airport City is designed to emerge as the headquarters for Central and Eastern Europe with a focus on the programme priorities of “Smart Cities” and “Travel & Hospitality”. Starting in the late summer of 2019, startups will find suitable space for their innovative spirit in Office Park 3. There specifically designed Airport City space is being created which will feature numerous, flexible co-working areas.

“The partnership with Plug and play creates a fantastic win-win situation for the growing business location of Airport City Vienna, serving as a globally networked magnet for the most creative minds but also as a pool of ideas and talents for established companies”, state Günther Ofner and Julian Jäger, Members of the Management Board of the airport operating company Flughafen Wien AG, on the occasion of the partnership officially announced today.

“Innovation knows no boundaries, and thus does not exclude any industry. In Silicon Valley, Austria has the reputation of fusing traditional quality with what is new. I am very interested in all the technologies we will be able to spread throughout the world from Austria and look forward to seeing what our Austrian partners will press ahead with”, says Saeed Amidi, CEO and founder of Plug and Play.

“Austria’s favourable geographical location in the centre of Europe is excellently suited to initially pilot disruptive technologies throughout the country and then use Austria as the base to develop them into a European or even a global trailblazer. From a strategic perspective, the Airport City site was decisive for us in light of the fact that startups and partners from all over the world can be flown in here and that we will also support local talents in our network above and beyond the country’s borders”, adds Renée Wagner, Managing Director of Plug and Play Vienna.

“The collaboration of Plug and Play with Vienna Airport marks a further important step in the dynamic development of the Airport City. I am firmly convinced that the Lower Austrian startup scene as well as domestic companies will benefit from these new internationalisation activities here at the airport”, states Johanna Miki-Leitner, Governor of the Federal Province of Lower Austria.

“As the owner’s representative for Vienna Airport, but also on behalf of the Viennese business community, I am gratified that Plug and Play, another internationally oriented player, has also decided to set up operations here. Every second startup in Austria is established in Vienna. A further accelerator will strengthen our entire region”, says a pleased Peter Hanke, the City of Vienna’s Executive City Councillor of Finance, Business, Digital Innovation and International Affairs.

The Airport City as an innovation hub for the travel industry
Two Plug and Play programmes with co-working spaces in Office Park 3 comprising an area of about 700 m2 in Office Park 3 will be launched at Vienna Airport. The programme priorities of “Smart Cities” and “Travel & Hospitality” will target startups with innovative business ideas which want to revolutionise either the world of smart cities and related industries or else the travel industry. The objective of Plug and Play is to bring together startups with investors and prominent companies and thus accelerate technological progress and make the innovations ready for the marketplace. When the new Office Park 4 office building is put into operation in May 2020, startups will also have an entire floor with state-of-the-art, customisable shared working areas covering 2,700 m2 at their disposal as of May 2020.


Plug and Play – Who can take part?
As is customary practice at Plug and Play, the best minds are chosen within the context of “Selection Days” held in the branch office twice annually. Every young company can apply directly to Plug and Play Vienna or via the Website of Plug and Play. In addition, a call for applicants is announced at universities and international partners.

Those startups who manage to be ranked among the top ten have made it. They win a spot in the company’s “accelerator programme”. Over a period of three months the best young companies will be given the opportunity to locate in a new co-working space at the Airport City, and to meet with numerous CEOs and potential customers or partners as part of the programme.


About Plug and Play Tech Center
Plug and Play is a globally operating American innovation platform headquartered in Sunnyvale in Silicon Valley. The California company was founded by Saeed Amidi in February 2006 and specialises in bringing together startups with investors and prominent companies. The underlying objective is to accelerate technological progress in a diverse range of industries with the help of special “accelerator programmes” and to compete internationally based on the global reach of Plug and Play. For this purpose, all-day screenings are regularly held at the company’s more than 30 worldwide branch office in order to select and further develop the best and most innovative business ideas. In the meantime, Plug and Play now boasts more than 300 cooperation partners throughout the world.

More information on Plug and Play and the new co-working space at the Airport City can be found at www.plugandplaytechcenter.com/travel and https://www.airport-city.at/coworking.