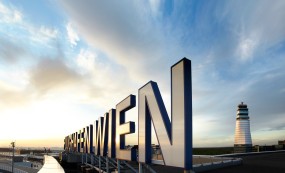 
“Vienna Airport continues to grow, showing a significant increase in revenue and earnings. This creates new jobs. At present about 22,500 people work at Vienna Airport. We are revising our financial guidance upwards for the 2019 financial year and expect revenue of over € 830 million and the net profit for the year to exceed € 170 million. Vienna Airport will invest about € 220 million in 2019 for its further expansion. In 2019 Vienna Airport was honoured by Skytrax for having the “Best Airport Staff in Europe” for the fourth time in five years, which is particularly gratifying”, explains Günther Ofner, Member of the Management Board of Flughafen Wien AG.

“Vienna Airport is experiencing an upswing. In the first four months, passenger volume at the airport rose strongly by 25.2%. We were the fastest growing European airport in our category in the first quarter of 2019. On April 12, 2019, we registered the busiest day in the airport’s history with 106,969 passengers. We assume that this record will be surpassed again this year and that we will handle more than 30 million passengers by the end of the year. New flight offerings on long-haul routes by Austrian Airlines, ANA, Air Canada and China Southern as well as by low cost carriers such as Laudamotion, Wizz Air and Level along with new airlines, destinations and frequency increases on the short- and medium haul are providing significant growth impetus”, states Julian Jäger, Member of the Management Board of Flughafen Wien AG.

Good traffic development in Q1/2019: +19.9% rise in passenger volume in the Flughafen Wien Group2
The Flughafen Wien Group including the foreign strategic investments in Malta Airport and Kosice Airport handled a total of 7.3 million passengers in the period January to March 2019, comprising a year-on-year rise of 19.9% from the prior-year level. The number of passengers at Vienna Airport climbed 24.6% to 6,059,700 travellers in the months of January to March 2019. The number of local passengers was up 29.4% in the first quarter of 2019, whereas transfer passenger traffic rose by 8.6%. The number of flight movements in the period January-March 2019 was up 15.8% from the previous year to 56,343 starts and landings. The average seat occupancy (seat load factor) rose slightly from 70.0% to 70.7% in the first three months of 2019. Cargo volume (air cargo and trucking) fell by 2.0% in the same period to 66,641 tonnes. Passenger traffic at Malta Airport increased by 2.6% to 1,203,014 passengers. This was in contrast to the 8.5% decline in passenger volume at Kosice Airport, which handled 83,942 passengers in the same period.

According to the global airport association Airports Council International (ACI), European airports reported an average passenger growth of 4.4% in the first quarter of 2019. Vienna Airport showed the strongest growth in Q1/2019 of all European airports with more than 25 million passengers per year.

Flughafen Wien Group considerably raises revenue and earnings guidance for 2019
The Flughafen Wien Group is considerably improving its initial financial guidance due to the good business development. Revenue in 2019 is expected to rise to over € 830 million, whereas Group EBITDA should exceed € 375 million and the net profit for the period is expected to be at least € 170 million. About € 220 million in investments are planned in the year 2019.

The Flughafen Wien Group including the foreign strategic investments in Malta Airport and Kosice Airport anticipates passenger growth of 8-10% for the year 2019. Passenger volume at Vienna Airport is expected to climb by more than 10% to approx. 30 million travellers.

Flughafen Wien Group handles 3.4 million passengers (+22.8%)
In April 2019, the total number of passengers handled by the Flughafen Wien Group (Vienna Airport, Malta Airport and Kosice Airport) rose by 22.8% to 3.4 million travellers. The accumulated passenger volume in the period January-April was up by 20.8% to 10.8 million. Vienna Airport registered a substantial increase in passenger volume of 25.2% to 8,803,884 million travellers from January to April 2019.

Malta Airport reported a strong increase in passenger volume of 10.5% in the month of April 2019, whereas Kosice Airport registered a decline of 6.3% in the number of passengers it handled.

The report by Flughafen Wien AG for the first three months of 2019, from January 1 to March 31, 2019, is available to the general public at the company’s offices at 1300 Flughafen Wien and at Bank Austria, 1020 Vienna, Rothschildplatz 1.It is also available on the Internet at http://viennaairport.com/en/company/investor_relations/publications_and_reports/
quarterly_reports.