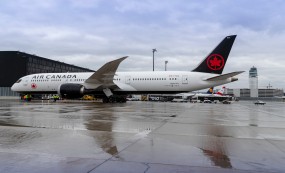 This morning, April 30, 2019, an Air Canada Dreamliner from Toronto landed in Vienna to inaugurate a new direct flight connection. The initial flight was greeted with the traditional water salute in Vienna. The flight connection was officially opened by Heidi Alberta Hulan, Ambassador of Canada in Austria, Mark Galardo, Vice President Network Planning at Air Canada and Julian Jäger, Joint CEO and COO of Vienna Airport. Mr. Jäger is pleased with the new flight connection: “Flights linking Vienna and North America have grown enormously in popularity. With Air Canada we welcome an ideal long-haul partner for this region, which will continue to grow in 2019.”

Canada is always worth the journey. The world’s second-largest country is considered to be a favourite tourist destination thanks to its impressive natural heritage of lakes, mountains, forests and a broad range of wild animals. The maple tree is particularly widespread in Canada. Over the years the famous “maple leaf” has emerged as the symbol for this North American country. For this reason, it is not surprising that maple syrup is almost exclusively made in Canada, which accounts for up to 90% of global production. Toronto, is the economic heart of Canada and one of the world’s leading financial centres. Numerous skyscrapers, including the famous CN Tower, dominate the skyline of the city. However, one can also discover numerous green spaces here, such as oval-shaped Queen’s Park. Passengers can take advantage of optimal Air Canada connecting flights from the Canadian metropolis to more than 120 destinations in Canada and the USA.

“In the first quarter of the year, we recorded 27.5% passenger growth on routes to North America. Air Canada greatly enhances our reach into this region”, said Julian Jäger commenting on the new service. “For this reason, we look forward to an excellent cooperation with Air Canada. Now two important destinations in Canada are directly accessible from Vienna due to the direct flight connection of Air Canada to the business centre of Toronto and of Austrian Airlines to the metropolis of Montreal.”

"We are very pleased and proud to be starting this new non-stop daily service to Austria and adding Vienna to our international network. As well as being a cultural and artistic capital, the city is also an important European business centre. This makes Vienna a very significant addition to our schedule. One sign of this new route’s importance to us is that we are dedicating to it our state-of-the-art Boeing Dreamliner, with three cabins of service, including our award winning premium Air Canada Signature Class“, said Mr. Galardo.

Daily non-stop flights to Toronto in a brand-new Dreamliner
Canada’s largest carrier operates daily, non-stop flights on the new route. A Boeing 787 Dreamliner takes off from Toronto at 6:35 p.m. every day of the week and lands in Vienna at 8:40 a.m. on the next day. The return flight departs from Vienna at 10:40 a.m. and arrives in Toronto again at 1:30 p.m. Five weekly flights will be offered in the winter season. Air Canada offers three service classes: Signature class, Premium Economy and Economy Class. . Regardless of the booking class, passengers can select from more than 600 hours of the best entertainment on their personal touchscreens, and also enjoy free meals and beverages. Practical USB ports are found on every seat to charge devices which are brought along.


CO2 neutral initial flight thanks to the wilderness sponsorship for passengers
In cooperation with the environmental organisation Wilderness International, the initial flight from Toronto to Vienna will be operated in a completely CO2 neutral manner. Every passenger on board will receive a certificate showing a wilderness sponsorship for an area covering 16 m², designed to help preserve a unique piece of a temperate rainforest for future generations. On balance, this flight enables more than 4,768 m² of untouched rainforest on the western coast of Canada to be protected.