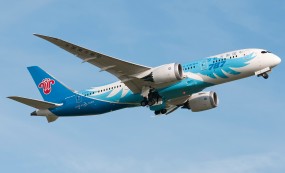 More Long-haul-flights from Vienna to Asia: China Southern Connects Austria’s Capital to Guangzhou and Ürümqi as of June 2019

Further long haul-growth at Vienna Airport: Starting on June 18, 2019, China Southern, Asia’s largest airline, will operate three weekly flights from Vienna to Ürümqi and Guangzhou in the People’s Republic of China. The open jaw flight will depart from Vienna on Tuesdays, Thursdays and Saturdays. The Chinese airline will thus link Vienna with two destinations in Northwest China and South China.

Leaving from Vienna, the China Southern flight will first land in Ürümqi, the capital of the autonomous region of Xinjiang Uygur in the northwest of China. The city is located directly on the historical and also planned “new” Silk Road connecting the cultures and trading infrastructures of West and East. Afterwards the flight will continue to the important industrial and trading city of Guangzhou, also called the “Factory of the West”. With more than ten million inhabitants, it is the most prominent metropolis along the Pearl River Delta, which is one of the largest contiguous urban areas in the world.

“China is one of Austria’s most important trading partners in Asia. Economic ties and tourism between the two countries are prospering. Chinese flight connections ranked among the top long-haul destinations from Vienna Airport in 2018. On balance, a total of five destinations in China can now be reached from Vienna thanks to the two new routes being offered. This strengthens the entire economic and tourism locations of Vienna and Austria”, says Julian Jäger, Member of the Management Board of Flughafen Wien AG in welcoming the new flight connections to China.

Norbert Kettner, Director of the Vienna Tourist Board, emphasizes the role of China and the significance of direct flights for tourism. “China is already Vienna’s second largest Far Eastern market with more than half a million overnight stays and by Chinese guests and a growth rate of 15% in 2018. The net revenue from overnight stays of Chinese guests in Viennese hotels increased even more, climbing by 25% last year. The Vienna metropolitan area was the third most popular city destination of Chinese guests in Europe, only surpassed by London and Paris. Vienna is a well-established brand in China, and the new flight connection of China Southern Airlines will give a further boost to tourism form China.”

Three weekly flights to Ürümqui and then Guangzhou in a Boeing 787 Dreamliner
Starting in June, the China Southern flight will arrive in Vienna on Tuesdays, Thursdays and Saturdays. A Boeing 787 Dreamliner will be deployed on the new route. This aircraft is characterised by spaciousness, low cabin pressure, improved air quality and optimal humidity. Accordingly, it offers passengers a particularly high level of travel comfort.

China Southern Airlines – Asia’s largest airline
China Southern, the largest airline in Asia and one of the biggest in the world (with respect to the size of its fleet) has an impressive fleet of 820 Boeing and Airbus aircraft. The Chinese airline operates more than 3,000 flights each day to 224 destinations in 40 countries and transported more than 139 million passengers in 2018. On June 15, 2018, China Southern Airlines was given the “2-Star Flight Safety Diamond Award” of the Civil Aviation Administration of China (CAAC) and was thus designated as China’s safest airline. Moreover, the renowned market research institute Skytrax bestowed its 4-Star Airline Rating on the Chinese airline.

More information and booking possibilities are available at www.csair.com/en or at the austrian office: