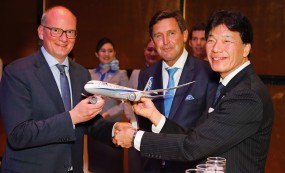 ANA is New in Town: Glamourous ceremony with the Vienna Philharmonic and More Than 150 Guests from the Industry

All Nippon Airways (ANA), Japan’s largest airline, now offers flight service to Vienna. 150 guests from the industry as well as from Vienna Airport welcomed the airline at an Austrian-Japanese gala ceremony in the Glass Hall of the Vienna Musikverein. Julian Jäger (Joint CEO and COO of Vienna Airport), Peter Hanke (Executive City Councillor of Finance, Business, Digital Innovation and International Affairs of the City of Vienna), Kiyoshi Koinuma (Ambassador of Japan to Austria) as well as Akira Nakamura (Senior Vice President EMEA of ANA) underlined the significance of the new route for both countries. Musical performances of a piano trio of the Vienna Philharmonic and a delegation of traditional Japanese Taiko drummers provided for impressive moments.

Julian Jäger, Joint CEO and COO of Vienna Airport, officially welcomed the airline to Vienna. “The Far East is an important growth market for Vienna Airport. In 2018 we registered more than 618,000 passengers in this region, comprising a year-on-year rise of over 33 percent. The fact that Japan’s largest airline decided to inaugurate a new, daily flight connection sets a milestone in the economic and tourist relations between both countries which have existed for 150 years.”
Peter Hanke, Executive City Councillor of Finance, Business, Digital Innovation and International Affairs of the City of Vienna, stated: “"Vienna and Tokyo have long maintained close economic and tourism ties. The reputation of Austria's capital city as a music and cultural destination steeped in tradition is well-known in Japan, and the Asian region is one of our most importnt tourism markets. We are pleased to have the new airline in Vienna and warmly welcome ANA and our Japanese guests."
Akira Nakamura, Senior Vice President, EMEA commented, “We are excited to be launching our direct flight between Vienna and Tokyo Haneda today. Our flights from Haneda and Vienna are perfect for both business and leisure travelers and we look forward to welcoming even more travelers from Austria to Japan with our award-winning onboard hospitality”.

All Nippon Airways operates out of Vienna again after a break of 17 years
ANA already offered flight service once on the Vienna to Tokyo-Narita route, namely in the years 1996-2002. Since Sunday, February 17, 2019, the largest Japanese airline once again flies to the Austrian capital city, but this time from Tokyo-Haneda, the most centrally-located airport serving the Japanese capital. A state-of-the-art Boeing 787-9 Dreamliner will land in Vienna daily at around 6 a.m. and depart for Tokyo again at 11:30 a.m. ANA mainly operates domestic flights from Haneda. As a result, passengers flying from Vienna can conveniently reach other regional destinations in Japan. The daily flight connection opens up new growth potential for tourism in Austria. Japan has been one of Austria’s most important Far Eastern markets. Overnight stays on the part of Japanese guests increased by 12 percent in 2018 alone compared to the previous year. The Austrian economy will also benefit from the new flight service. This new flight connection has been launched now at the time commemorating the 150th anniversary of the first treaty of friendship concluded between the two countries and signed in Tokyo and October 18, 1869. By the way, the agreement was promoted by a musical performance of classical Western music played on a piano brought to Japan. This musical interlude was performed by a member of the Austrian delegation in the presence of the Japanese Emperor. Vienna is still a popular travel destination for Japanese tourists due to its pronounced culture featuring classical music.

Vienna Philharmonic, Taiko drummers and 150 guests welcome ANA in Vienna
More than 150 guests from the business community, tourism and culture welcomed the Japanese airline in Vienna, including the Management Board of Vienna Airport Günther Ofner and Julian Jäger, the Managing Director of Austro Control, Valerie Hackl, the Chief Financial Officer of Austrian Airlines, Wolfgang Jani, the President of the Austrian Hotelier Assocation, Mrs. Michaela Reitterer, the President auf the Austrian Aviation Association, Mr. Peter Malanik and many more. The event was moderated by Nadja Bernhard of the Austrian Broadcasting Corporation ORF. A venue particularly steeped in tradition was selected to serve as the event space for yesterday’s gala evening. The Musikverein (Society of Friends of Music) not only boasts one of the most beautiful and acoustically best music halls in the world but has also been the home of the world-famous Vienna Philharmonic for 175 years. The orchestra enjoys a great reputation in Japan. On this occasion the orchestra demonstrated its brilliance in the Glass Hall of the Musikverein. A piano trio of the Vienna Philharmonic accompanied a 15-minute long video installation of the well-known Austrian filmmaker Georg Riha with a piece of music by Franz Schubert. Exciting musical impressions from Japanese culture were presented by Japanese Taiko drummers, who travelled to Vienna specifically for this event.

All Nippon Airways: Largest Japanese airline and member of the Star Alliance
ANA has been granted the top ranking of five stars by SKYTRAX each year since 2013, not least due to its high-quality service in line with the motto “Inspiration of Japan”. ANA is the only Japanese airline to be given this prestigious rating for six straight years. Moreover, ANA was named “Airline of the Year” three times over the past ten years, namely in 2017, 2013 and most recently in 2018. As a result, ANA is one of the very few airlines which has been given this coveted award several times. ANA was founded in 1952 with a fleet of only two helicopters. Since then it has evolved into the largest airline in Japan and one of the most important in Asia, offering 80 international flight connections and 118 domestic routes. More information and booking possibilities can be found at https://www.ana.co.jp/group/en.