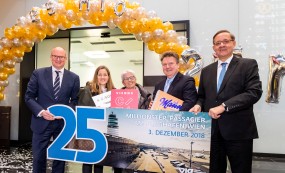 Vienna Airport has achieved a new all-time high. Around noon today on Monday, December 3, 2018, the 25 millionth passenger was welcomed on her arrival in Vienna. Vienna’s Mayor Michael Ludwig and the Members of the Vienna Airport Management Board Julian Jäger and Günther Ofner personally greeted the traveller and gave her a voucher booklet. Thanks to the outstanding traffic development, year-on-year growth of more than 10% is expected for the entire year 2018.

“The year 2018 is emerging as a record year. The figure of 25 million passengers handled at the airport means that we are already surpassing the previous all-time high achieved in 2017 at the beginning of December 2018. This year will already go down in the history of Vienna Airport as the one with the highest passenger volume. Other records could be broken before the end of the year, and even the 27 million passenger threshold could be surpassed”, say Julian Jäger and Günther Ofner, Members of the Management Board of Flughafen Wien AG, who are pleased with the airport’s success.

“I am happy to be able to welcome the 25th millionth passenger at Vienna Airport this year. Vienna Airport is of crucial importance to Vienna as a business location and the further development of the entire eastern region of Austria. Airport expansion is the only way to ensure that an increased number of airlines frequent the travel destination of Vienna and that more potential destinations can be reached from Vienna. The city’s position as a Central European flight hub has to be strengthened. This is necessary and essential for domestic value creation, tourism and safeguarding jobs”, states Michael Ludwig, Mayor of Vienna.

25 millionth passenger surprised with a voucher booklet
The 25 millionth passenger arrived in Vienna at noon today from Altenrhein. The woman named Bettina Corazza and her mother Marie-Therese were warmly welcomed at Vienna Airport by the mayor of the Austrian capital city and the two Flughafen Wien AG Management Board members. The fortunate travellers were given gift certificates valued at € 2,500 for shopping and restaurants at the airport as well as a bag of Vienna-related goodies, including the Vienna City Card to optimally explore the city as well as other useful vouchers and sweet greetings from Vienna in the form of an oversized box of Mannerschnitten wafer biscuits. The two passengers will return to Appenzell in Switzerland after spending a few days in Vienna.