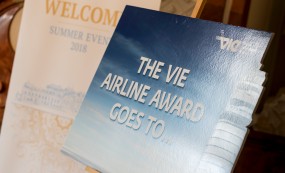 “With passenger growth of 13.4%, Austrian Airlines recorded about 11.8 million passengers at Vienna Airport in 2017 and thus contributes a significant share of the airport’s growth success. Thanks to new long-haul destinations such as the cities of Tokyo and Cape Town as well as numerous frequency increases, Austria’s flagship carrier is once again pursuing a growth path in 2018. We congratulate the airline on this excellent performance”, states Julian Jäger, Member of the Management Board of Flughafen Wien AG.

“Growth is due to many reasons. A very important one is the good cooperation between the airport and the airline. I am very pleased that we succeeded together in luring more tourists and business people to Vienna again”, says Kay Kratky, CEO of Austrian Airlines.

Austrian Airlines honoured as the “Best Performing Airline”
2017 was a record year for Austrian Airlines. The airline achieved passenger growth of 13.4% at Vienna Airport to a total of 11,801,152 passengers. On balance, Austrian Airlines generated a 12.8% increase in passenger volume, transporting 12.9 million travellers last year. The primary growth drivers were frequency increases within Europe and the expansion of long-haul routes. The airline launched direct flight service to Los Angeles (US) and Mahé (SC) in the year 2017. New additions to the airline’s long-haul route network are also being implemented in 2018. Since May Austrian Airlines has been flying directly to Tokyo (JP) up to five times per week and will offer up to two direct weekly flights to the South African metropolis of Cape Town (ZA) starting at the end of October. Moreover, the new Boeing 777 named “Papa Fox” is already enhancing the travelling experience on long-haul flights. Austrian Airlines expects to achieve a new passenger record once again this year.

Airline Award for special achievements at the flight hub
Since the year 2013, Vienna Airport has been giving the Airline Award to those airlines which contribute to the development of the airport site by generating the highest passenger growth in absolute terms. The award is handed over to the winner by Flughafen Wien Management Board Member Julian Jäger on the occasion of the annual “VIE Summer Event”. 150 industry representatives from the fields of tourism, aviation and business attended the event held in the Lower Belvedere in Vienna.