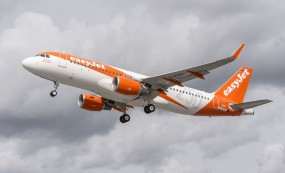 easyJet now offers new flight connections from Vienna. The airline recently launched flight service from Vienna to the Italian fashion metropolis of Milan. As of today, June 8, 2018, it also commenced flights on a new route, namely to Basel in Switzerland. The new flight connections were officially inaugurated by Thomas Haagensen, Group Markets Director at easyJet and Julian Jäger, Member of the Management Board of Flughafen Wien AG.

“We are pleased with the two new flight connections offered by easyJet at Vienna Airport. The airline’s expansion of its route network once again confirms the market potential and performance of our flight hub. Milan and Basel comprise a great addition to the existing flight offering. At present, easyJet serves a total of thirteen destinations from Vienna”, says Julian Jäger, Join CEO and COO of Vienna Airport.

“Our new routes linking Vienna with Basel and Milan represent attractive flight connections for private and business travellers, and we are happy to offer an even greater selection to the approximately 1.5 million passengers who fly to and from Austria each year”, states Thomas Haagensen, Group Markets Director at easyJet. “We are continually expanding our offering to the Austrian capital city. Since the founding of easyJet Europe based in Vienna in July 2017, we already registered or re-registered more than 100 aircraft of the easyJet fleet in Austria. As a result, easyJet is now Austria’s largest airline. The new route underscores our growth plans for Austria, so that our customers will profit from an even greater choice and low air fares”, he adds.

Daily flights to Milan and six times per week to Basel
easyJet now offers daily flight service from Vienna to the Italian fashion metropolis of Milan, serving Milan-Malpensa Airport. Starting today, easyJet also operates six flights per week to Basel. easyJet departs from Vienna to the city on the Rhine in Switzerland every Monday, Tuesday, Wednesday, Thursday, Friday and Sunday.

About easyJet
easyJet is considered to be one of Europe’s leading airlines thanks to its unique combination of a top-notch route network linking the most important airports in Europe, great air fares and friendly service. easyJet offers flight service to more of the most popular European destinations than any other airline. Each year more than 82 million passengers fly with easyJet, of whom thirteen million are business travellers. easyJet operates a fleet of 298 aircraft flying to 980 routes connecting more than 156 airports in 33 countries. More than 300 million people in Europe live less than one hour driving time from an easyJet airport. More information and booking possibilities are available at www.easyjet.com.