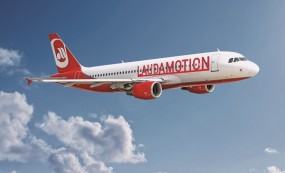 Vienna Airport: Laudamotion Opens a Base and Offers Flights to Palma, Chania and Pisa

The low-cost offering in Vienna is expanding even more. Starting today, June 1, 2018, Laudamotion will officially put its base at Vienna Airport into operation. All in all, four aircraft will be permanently stationed in Vienna. Moreover, the Austrian airline will take off for the first time to Palma de Mallorca, Chania and Pisa. The base and flight connections were officially opened today by Niki Lauda, Laudamotion, Andreas Gruber, CEO Laudamotion and Julian Jäger, Join CEO and COO of Vienna Airport.

“Laudamotion represents the start of a new low-cost carrier with a base and a variety of flight connections in Vienna. In addition to growth at the airport hub, the new airline also comprises a great offering for passengers departing from Vienna. Effective immediately, fantastic destinations can be reached with Laudamotion for people going on holiday in the summer”, says Julian Jäger, Joint CEO and COO of Vienna Airport.

“We are pleased that we are finally able to launch flight operations from our home base in Vienna. Laudamotion has a first-class platform for more than 60 Laudamotion routes from Austria, Germany and Switzerland at its disposal thanks to its access to ryanair.com, the most widely visited airline Website”, adds Niki Lauda of Laudamotion.

“We want to mainly convince passengers on the basis of our great price-performance ratio and the quality of our board product. Moreover, we also have an extensive route network and naturally Lauda’s typical service orientation”, states Andreas Gruber, CEO Laudamotion.

Daily to Palma de Mallorca and three times per week to Chania and Pisa
The Austrian low-cost carrier will now take off daily to Palma de Mallorca. The flight will leave Vienna at 5 a.m. and land in Palma at 7:20 a.m. The return flight will depart from Palma at 8:30 p.m. and arrive back in Vienna Airport again at 10:50 p.m. An additional flight will be operated on Thursdays and Saturdays, taking off from Vienna at 11:50 a.m. and landing in Palma at 2:10 p.m. The flight back to Vienna will leave Palma at 2:55 p.m. and land in Vienna at 5:25 p.m. Laudamotion will fly to Chania three times each week, namely on Mondays, Wednesdays and Fridays. Furthermore, the airline will also launch flight service to Brindisi, Ibiza, Kalamata, Malaga, Paphos and Santorini in the course of the summer.

Laudamotion stations four aircraft in Vienna
The airline will permanently station four Airbus A320 and A321 aircraft in Vienna. The base will be expanded when the winter flight schedule takes effect to include six additional aircraft for a total of ten planes. The current Laudamotion fleet operates under the code OE and consists of 19 jets deployed on flights departing from Vienna, Berlin, Düsseldorf, Stuttgart, Nuremberg, Cologne, Munich and Frankfurt. The entire offering of all Laudamotion flights can be found at www.laudamotion.com.