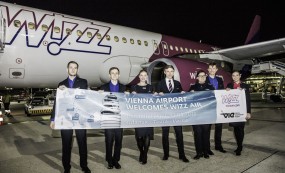 Wizz Air Lands at Vienna Airport for the First Time

A new airline has arrived at Vienna Airport. Yesterday, April 27, 2018, Wizz Air launched flight operations from Vienna. Effective immediately, the destinations of Danzig, Tuzla and Varna can be reached from Vienna Airport by flying with the low-cost carrier. The new routes were officially inaugurated yesterday by Vienna Airport and Wizz Air.

“We are very pleased with the start-up of flight operations in Vienna by Wizz Air. With WIZZ, an established low-cost carrier is represented in Vienna. By flying to numerous new destinations in 2018, it will contribute to ensuring an even more multi-faceted destination offering. In particular, the three new flight connections to Danzig, Tuzla and Varna strengthen the role of Vienna Airport as a gateway to Eastern Europe. We are one of the leading flight hubs to this region, with a total of 45 Eastern European destinations”, says Julian Jäger, Joint CEO and COO of Vienna Airport.

”Today we mark an important milestone as we start operations from Vienna Airport. Our Vienna base will see rapid expansion over the course of the next 9 months. We will operate 15 routes from Vienna this summer and this will increase to a total of 30 routes by the end of March 2019. We look forward to offering affordable travel opportunities to a broad range of destinations across Europe, reaching as far as Iceland in the North, Israel in the South, Georgia in the East and the Canary Islands in the West. We look forward to starting a fruitful partnership with Vienna Airport and welcome our Austrian travellers on board”, states George Michalopoulos, CCO of Wizz Air.

Launch of light operations with flight connections to Danzig, Tuzla and Varna
Starting this weekend, Wizz Air will begin operating from Vienna Airport. As of April 27, 2018, Danzig in Poland will be served every Monday, Wednesday, Friday and Sunday, with flights departing from Vienna at 9:15 p.m. The airline will fly to Tuzla in Bosnia-Herzegovina as of April 27, 2018, leaving Vienna at 9.55 p.m. every Monday, Wednesday and Friday. Starting on April 28, 2018, flights will be offered to Varna in Bulgaria, taking off from Vienna at 6:35 on Tuesdays and Saturdays.

Numerous new destinations and WIZZ base in Vienna
Wizz Air will launch many other flight connections from Vienna during the year 2018. Following the commencement of flight service to Danzig, Tuzla and Varna, the airline will gradually add Bari, Bergen, Billund, Cluj, Dortmund, Eindhoven, Kutaisi, Kharkiv, Larnaca, Malta, Málaga, Nis, Ohrid, Rome, Tel Aviv, Tenerife, Thessaloniki and Valencia. The airline will also permanently station one Airbus A320 jet at Vienna Airport starting in June 2018 and two Airbus A321 aircraft as of November 2018. The Wizz Air base in Vienna is scheduled to be expanded in 2019 with two other planes for a total of five aircraft. The destination offering will be further complemented in 2019 by flight connections to Catania, Lisbon, Madrid, Malmö, Milan, Nice, Reykjavik and Stockholm.

About Wizz Air
Wizz Air is the largest low-cost airline in Central and Eastern Europe, operates a fleet of 96 Airbus A320 and Airbus A321 aircraft, and offers more than 600 routes from 28 bases, connecting 141 destinations across 44 countries. At Wizz Air, a team of more than 4,000 aviation professionals delivers superior service and very low ticket prices making Wizz Air the preferred choice of 29.6 million passengers in the financial year ended 31 March 2018. Wizz Air is listed on the London Stock Exchange under the ticker WIZZ and is included in the FTSE 250 and FTSE All-Share Indices. Wizz Air is registered under the International Air Transport Association (IATA), Operational Safety Audit (IOSA), the global benchmark in airline safety recognition. The company was recently named 2017 - European Airline of the Year by Aviation 100, a renowned annual publication that recognizes the year’s most outstanding performers in the aerospace industry. More information and booking opportunities at www.wizzair.com