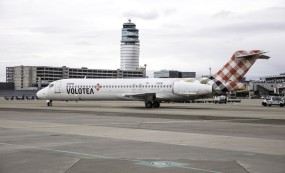 “Bilbao is the third destination served by Volotea in the current flight schedule in addition to Marseille and Nantes. We are delighted with the expansion of the Spanish airline in Vienna. This puts new flight connections to popular holiday destinations at the disposal of our passengers. On balance, 105 weekly flights to Spain are now being operated from Vienna Airport”, says Julian Jäger, Member of the Management Board of Flughafen Wien AG, who is pleased with the new flight offering.

“We are pleased to offer this new direct connection from Vienna to one of the most exciting and vibrant cities in Northern Spain. Bilbao offers a wide range of top events in 2018, including sports, music and gastronomy, and it the heart of Basque culture in Green Spain. We are proud to add this new destination to Vienna’s airport line-up that is being very well received at both ends, allowing touristic and business liaisons between both dynamic cities.” states Carlos Cerqueiro, Corporate Development and Communications Director of Volotea.

Twice weekly to the port city of Bilbao
The Spanish airline will offer flight service on the new route twice each week from Vienna. On Thursdays and Sundays, an aircraft will depart from Bilbao at 6:45 a.m. and land in Vienna at 9:15 a.m. The return flight will take off from Vienna Airport at 9:40 a.m. and arrive in Spain again at 12:30 p.m. The legendary Guggenheim Museum designed by Franz Gehry is one of the special attractions luring visitors to the capital of the Basque Country.

Volotea serves 81 destinations in Europe
Volotea, the airline of European mid and small-sized cities, offers direct flights at very competitive prices. Since its creation in April 2012, Volotea has carried more than fifteen million passengers across Europe and 4.8 million in 2017. In 2018 Volotea operates 293 routes among 81 medium and small-sized cities in 13 countries: France, Italy, Spain, Germany, Greece, Croatia, The Czech Republic, Albania, Portugal, Malta, Austria, Ireland and Luxembourg.  The airline expects to carry between 5.7m and 6.0 passengers in 2018. Volotea operates its network with 32 aircraft in 2018. Its fleet includes Boeing 717s and Airbus A319s. More information and booking options can be found at www.volotea.com.