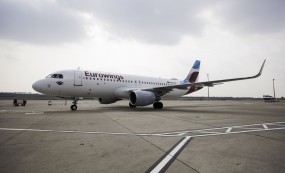 Eurowings is launching flight service on new routes from Vienna Airport starting on March 25, 2018, when the 2018 summer flight schedule takes effect. The German low-cost carrier will inaugurate flights to Larnaca, Catania, Corfu, Chania, Heraklion, Kos and Rhodes. And a top for spotters: Eurowings is deploying the new Airbus A340 on the Vienna-Düsseldorf route.

“Eurowings, which has six aircraft stationed at Vienna Airport, is contributing to the successful growth of the Vienna flight hub thanks to its numerous new flight connections. The steady route expansion of Eurowings in Vienna not only underlines the potential of Vienna Airport but also our good cooperation with the airline. Travellers will now enjoy a diverse new flight offering from Vienna for their summer holidays based on seven new routes to popular holiday destinations in Greece, Italy and Cyprus”, says Julian Jäger, Joint CEO and COO of Flughafen Wien AG, pleased with the new flight connections.

“Eurowings is the fastest growing airline in Europe. I am very pleased that demand for our attractive flight offerings in Vienna is continually increasing. We are adding a large number of new flight connections to our route network at the end of March starting with the new summer flight schedule”, says Dieter Watzak-Helmer, Managing Director of Eurowings Europe.

Numerous new flight connections in the summer of 2018
Eurowings will launch flight service to numerous destinations on a seasonal basis in the summer 2018 flight schedule. Accordingly, it will offer two weekly flights to Larnaca on Cyprus as of March 25, 2018 and two flights each week to Catania, Italy starting on March 26, 2018. As of May 1, 2018, the airline will offer two flight connections to Corfu and four to Rhodes in Greece. A day later, on May 2, 2018, Eurowings will operate three flights each week to Chania and two flight connections to Kos in Greece. Moreover, the German low-cost carrier will operate three weekly flights from Vienna to Heraklion, Greece starting on May 4, 2018.

Eurowings offers quality flights at favourable prices
Eurowings offers the right flight for every occasion based on a broad offering of quality flights at favourable prices and different air fare options. The German low-cost carrier serves more than 210 destinations in Europe and throughout the world, for example the USA, Dominican Republic, Cuba and Thailand. More information on the airline as well as booking possibilities are available on the Eurowings Website at www.eurowings.com.