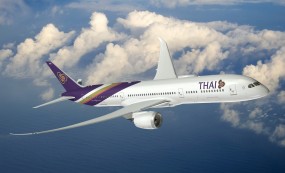 Passengers will be able to fly to Bangkok even more comfortably than in the past. As of April 20, 2018, Thai Airways is increasing frequencies on its direct flight service between Vienna and Bangkok. As a result, the capital city of Thailand will be served five times per week from Vienna. To ensure even greater travel comfort, THAI will deploy a Boeing 787-8 Dreamliner to and from Vienna in the future, the first time it is using the aircraft to a European destination.

“Bangkok is one of the most popular vacation destinations for passengers from Austria, especially during the winter months. We are pleased that THAI has already decided to increase frequencies on its flight connection between Vienna and Bangkok shortly after entering the market in November 2017. This confirms that the offering has been well received in Austria. Passengers from Vienna will thus enjoy improved possibilities to travel to Thailand’s capital. In addition, Vienna will be the first European capital that THAI will serve with a Dreamliner. By deploying the Dreamliner aircraft on the Vienna-Bangkok route, the airline is also enhancing the travel comfort of passengers. On balance, thanks to the new frequency we currently offer 16 flight connections to Bangkok each week”, says a pleased Julian Jäger, Member of the Management Board of Flughafen Wien AG, commenting on the new developments at THAI.

Five weekly flights to Bangkok on a Dreamliner
Thai Airways will increase the number of weekly flights operated between Vienna and Bangkok from four to five. An aircraft will leave Bangkok at 1:20 a.m. on Monday, Thursday, Friday, Saturday and Sunday and land in Vienna at 7:15 a.m. local time. The return flight will take off from Vienna at 2:35 p.m. and arrive in Bangkok at 5.35 a.m. on the next day. The direct flight connection will be served by a Boeing 787-8 Dreamliner as of April 20, 2018. Vienna is the first European capital to which THAI is deploying a Dreamliner jet. The aircraft stands out thanks to its spaciousness, low cabin pressure, improved air quality and optimal humidity and thus offers passengers a particularly high level of travel comfort.

THAI – the founding member of the Star Alliance has been operating in Vienna since November 2017
Thai Airways began operating at Vienna Airport in November 2017 and has been offering direct flight connections between Vienna and Bangkok since then. The national airline of the Kingdom of Thailand transports about 20 million passengers each year and is a founding member of the Star Alliance, the first global and the world’s largest airline alliance. Thai Airways boasts a fleet of 100 aircraft, including six Airbus A380 jets, the largest passenger aircraft in the world at present. The route network not only includes Bangkok but eleven other destinations within Thailand and more than 70 destinations in 33 countries on five continents, with a focus on the Asia/Pacific region. Within the context of the Skytrax 2017 World Airline Awards, THAI was honored for having the “World’s Best Economy Class”, the “World’s Best Airline Lounge Spa” and the “Best Economy Class Onboard Catering”. More information on booking possibilities is available at: www.thaiairways.at.