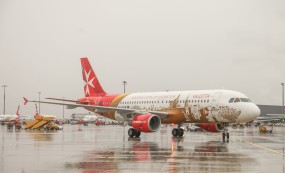 Starting today, Friday, January 19, 2018, Air Malta operates flights destined for Catania, the historic port town in Sicily.  The airline deploys an Airbus A320/A319 for the new route twice per week. Catania is the second route served by the Maltese airline from Vienna in addition to Malta.

“Alongside the existing flight connection from its home base, Air Malta now serves a new route linking Vienna and Catania. In particular, holidaymakers benefit from the convenient travel options to the largest island in the Mediterranean. Sicily is not only home to numerous historical sights, but also to Mount Etna, Europe’s biggest volcano, which has been listed as a UNESCO Natural World Heritage Site since the year 2013. On balance, passengers can choose among numerous direct connections to six destinations in Italy in the current winter flight schedule, and even fourteen flights in the summer flight schedule for 2018,” says Julian Jäger, Member of the Management Board of Flughafen Wien AG, who is pleased with the additional flight connection.

Twice weekly from Catania to Vienna
Air Malta takes off from Catania at 7:15 a.m. every Tuesday and Friday and lands in Vienna at 9:30 a.m. The return flight on Tuesdays leaves Vienna at 10:35 a.m. and arrives in Catania at 12:45 p.m. On Fridays the Malta Air flight departs from Vienna at 6:15 p.m. and lands in Catania at 8:25 p.m. The airline operates an Airbus A320/A319 to serve the new route, the same as with the existing flight connection to Malta.

Spotter initiative: Initial flight with Airbus in a specially painted livery
On the occasion of the initial flight, the Maltese airline will operate a specially painted Airbus A320 aircraft and link the launch of flight service on the new route with a photo campaign for plane spotters. Aviation fans can take photos of the take-off and landing of the Airbus jet featuring the Valletta paintwork in Catania and Vienna, and upload the photos with the hashtags #airmalta and #cataniavienna or #viennacatania. Two tickets for flights on the new route will be offered as prizes for the best photos of the aircraft taken in Vienna and Catania.

About Air Malta
Air Malta is the national airline of Malta and operates from its base at Malta Airport. With a fleet of eight aircraft, including Airbus A320 and A319 jets, the Maltese airline serves a route network of more than 25 destinations across Europe and the Mediterranean region. Thanks to its codeshare agreement with numerous other airlines, Air Malta also offers flights to North America and the Middle East. More information on the airline and booking flights can be found at www.airmalta.com.