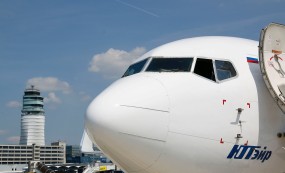 “With UTair, we welcome a new airline to Vienna Airport which will make the Russian capital city even more accessible for passengers. Moscow-Vnukovo, the third largest and the oldest international commercial airport in Russia, is the nearest to the city centre of all airports in the Moscow metropolitan area. Accordingly, travellers will enjoy an even more convenient journey to begin their city trip to Moscow. In total, we now offer eight daily flights between Vienna and Moscow thanks to the new daily frequency”, says Julian Jäger, Member of the Management Board of Flughafen Wien AG, pleased about the new flight connection.

“UTair Aviation is working to make more European directions available for Russian clients. Our primary passengers are coming from regions of Russia. That’s why we set up the schedule of our new flights to Vienna, so as to minimize transfer time for customers from Kazan, Krasnodar, Krasnoyarsk, Kurgan, Magnitogorsk, Makhachkala, Mineralnye Vody, Rostov-on-Don, Samara, Saint-Petersburg, Sochi, Stavropol, Surgut, Syktyvkar, Tyumen, Ufa and Cheboksary. Vienna, one of the first European flights we are launching, was selected for a good reason. Recently, the capital of Austria has been showing an explosive growth of tourism. Our travelers visit Austria all year round: in winter – for skiing and in summer – to attend lots of famous Austrian musical festivals”. – said Pavel Permyakov, the Chief Commercial Officer of UTair Passenger Airlines.

UTair with 160 daily scheduled flights at Moscow-Vnukovo
UTair Aviation is the core enterprise of UTair Group, which includes companies performing aircraft (fixed-wing and rotary-wing) operations, and enterprises for aircraft R&M, personnel training, rendering and sale of flight services. In 2016, UTair Aviation fleet transported 6,654,417 passengers. During peak season, UTair flies to 170 destinations, including 65 unique destinations. UTair fleet includes more than 60 up-to-date aircraft. UTair uses Vnukovo International Airport in Moscow as its main hub, where over 160 UTair flights are scheduled daily. UTair Group is headquartered in Surgut. UTair has been included in IOSA Registry since 2008.