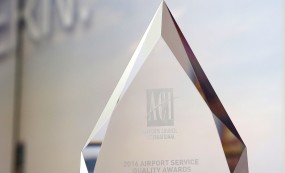 Gold for Vienna Airport: International Airport Association ACI Crowns Vienna Airport as the Best Airport in the Category "Europe and 15-25 Million Passengers" for the First Time.

Airports Council International (ACI), the global association of airport operators, honoured Vienna Airport with the award in gold in the category “Europe and 15-25 Million Passengers” for its outstanding service quality. Today, on May 24, 2017, Angela Gittens, Director General ACI World, presented the Airport Service Quality (ASQ) award at an official ceremony to Julian Jäger and Günther Ofner, Members of the Management Board of Flughafen Wien AG. Johanna Miki-Leitner, Governor of the Federal State of Lower Austria and Michael Häupl, Mayor of the City of Vienna, attended the event as shareholder representatives along with numerous representatives of business location partners, public authorities and airlines.

”Airports are fortunate to play an important role in the lives of over 7.6 billion travellers. At any given day at airports all over the world people meet, bid farewell, create and become inspired. Vienna Airport has clearly recognized that putting the passenger first is a shared priority among all aviation stakeholders, front-line public contact and those behind the scenes.” says Angela Gittens, Director General, Airports Council International.

“The airport in Vienna-Schwechat plays an important role in the Federal State of Lower Airport as an employer and economic driver as well as a tourism hub”, states Lower Austrian Governor Johanna Mikl-Leitner. “More than 20,000 people are directly employed at the airport site, 40% of whom come from Lower Austria. Good international flight connections are decisive if regions want to grow economically. That is why we will do everything we can to ensure that the airport continues to develop as dynamically as it has up until now. The award ceremony today confirms that the path is the right one, and I am very pleased that our airport also enjoys such high recognition at an international level”, Ms. Miki-Leitner adds.

“Vienna Airport is not only an indispensable traffic interface in the heart of Europe, but also a perfect calling card for the business and tourism location of Vienna thanks to its good development”, says Michael Häupl, Mayor of the City of Vienna. “I would like to thank all the people who contributed to this well-deserved award, and sincerely congratulate the employees and the two Management Board members Julian Jäger and Günther Ofner”, Mr. Häupl adds.

“The improved service quality and service orientation at Vienna Airport are reflected in worldwide passenger surveys. In particular, the parameters of customer orientation and friendliness, cost-free WLAN, cleanliness and efficiency are given outstanding ratings”, emphasize Julian Jäger and Günther Ofner, Members of the Management Board of Flughafen Wien AG. “We are particularly proud to also accept the ASQ Award in gold from ACI after being granted the 4-Star Airport rating and winning the award for the ‘Best Airport Staff Europe’ three times from Skytrax. We would like to express our gratitude to our employees whose dedication and remarkably high level of commitment make such a substantial contribution to our quality standards”, they conclude.

Top-class event
Angela Gittens, Director General ACI World, brought the ASQ Award in gold to Vienna in order to personally hand it over to the two Flughafen Wien AG Management Board members Julian Jäger and Günther Ofner. In her speech, Gittens underlined the pronounced customer orientation and outstanding infrastructure facilities of Vienna Airport. In addition to Johanna Mikl-Leitner, Governor of the Federal State of Lower Austria and Vienna’s Mayor Michael Häupl, members of the Vienna and Lower Austrian state parliaments, representatives of neighbouring municipalities and numerous business location partners were among the approximately 100 invited guests.

Increasing service quality
The airport has developed a large number of measures since 2012 to enhance service quality for the benefit of passengers. Numerous awards over the past few months underline the fact that the service initiative is having a positive impact, which in turn is reflected in improved passenger satisfaction. Vienna Airport was given the “Beryll Award” for its commitment to barrier-free access. It won the Airport Service Quality (ASQ) award in bronze and in gold for its high service quality and received the award for “Best Airport Staff Europe” from Skytrax for the third straight year. Moreover, since the fall of 2015 Vienna Airport has boasted the 4-Star Airport rating of the internationally renowned rating agency Skytrax and is thus in the top ranks of international airports.

ACI: Gold for the high-quality service at Vienna Airport
The annual quality survey of Airports Council International (ACI) with more than 600,000 interviewees provide a detailed insight into passenger satisfaction. Parameters such as “orientation”, “security checks”, “food & beverage”, “airport facilities” and “overall satisfaction” were analysed at more than 300 airports in 84 countries. The results were classified according to region as well as passenger volume. The excellent service quality at Vienna Airport was honoured with gold in the category “Europe and 15-25 Million Passengers”.

More information is available on the Website of ACI: http://www.aci.aero/Customer-Experience-ASQ/ASQ-Awards/Current-Winners/Best-Airport-by-Size-and-Region/Europe