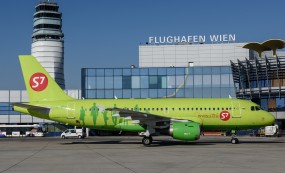 Now there are even more flight connections from Vienna to the Russian capital. Since yesterday, March 26, 2017, the Russian airline S7 Airlines has been offering one daily frequency between Vienna and Moscow-Domodedovo. At a press conference, the new flight connection was officially opened by Alexey Leonov, Deputy General Representative Europe of S7 Airlines and Julian Jäger, Member of the Management Board of Flughafen Wien AG yesterday evening, March 27, 2017.

“The ongoing growth in frequencies to the Russian capital is a positive sign for the Russian market and provides important and positive impetus to the future development of Eastern European flight traffic from the Vienna flight hub. We are very pleased that S7 Airlines decided to launch flight service between Vienna and Moscow. On balance, flights are offered from Vienna to Moscow up to seven times per day in the current flight schedule.”, says Julian Jäger, Member of the Management Board of Flughafen Wien AG, commenting on the new flight connection.
“S7 Airlines performed flights to Austrian cities Innsbruck and Salzburg in wintertime. These flights are popular for winter holidays, when our passengers travel to Alpine ski resorts. Now we are launching a flight to Vienna, the capital of Austria, for fans of excursion trips, art and classical architecture. We will also be happy to welcome passengers from Vienna onboard of S7 Airlines flights. The schedule is set up to make it convenient to travel not only from Vienna to Moscow, but also to other Russian cities of S7 Airlines route map with a short-time connection at the Domodedovo airport,” – said Alexey Leonov, Deputy General Representative Europe of S7 Airlines.

Daily flight service to Moscow-Domodedovo
The Russian airline S7 Airlines offers flight connections on the route between Vienna and Moscow-Domodedovo five times a week (Mon, Tues, Fri, Sat, Sun) deploying an Airbus A319, to be expanded to daily service starting in May. S7 Airlines leaves Moscow every day at 3 p.m. and arrives in Vienna at 5 p.m. The return flight departs from Vienna at 5:55 p.m. and lands again in Moscow-Domodedovo at 9:40 p.m.
S7 Airlines is a oneworld member
S7 Airlines carried 13,1 million passengers in the year 2016. The route network of the Russian carrier extends from Europe and the Middle East to Asia and the Pacific region. On balance, S7 Airlines flies to a total of 119 destinations. Moreover, the airline boasts the largest route network within Russia and operates a modern and young fleet of aircraft consisting of 64 Boeing and Airbus jets. S7 Airlines has been a member of the global oneworld airline alliance since 2010. More information and booking options are available on the Website of S7 Airlines at https://www.s7.ru/.