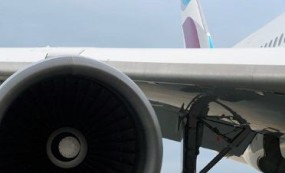 Eurowings has added new destinations to its route network in the summer 2017 flight schedule which has been in effect since March 26, 2017. Flight service from Vienna is now offered to Birmingham, the second largest city in Great Britain. Moreover, the airline is offering new flight connections to Brindisi, Ibiza, Kavala, Lamezia Terme, Madrid, Malta, Mytilene, Nice, Olbia, Pathos, Porto, Samos, Santorini and Zadar
The new routes were officially opened by Robert Jahn and Dieter Watzak-Helmer, Managing Directors of Eurowings Europe and Julian Jäger, Member of the Management Board of Flughafen Wien AG today, March 27, 2017 within the context of a photo session.

“With a total of 34 destinations and 203 weekly frequencies, the flight offering of Eurowings from Vienna has almost doubled compared to the previous year. Six Airbus A320 aircraft of the German airline are now stationed at Vienna Airport. We are very pleased with this tremendous expansion. In particular, the new direct flight connection to Birmingham, one of the most frequently visited cities in Great Britain, excellently complements our existing flight offering from Vienna”, says Julian Jäger, Member of the Management Board of Flughafen Wien AG.

"Eurowings is currently the fastest growing European airline. We are particularly pleased with the high level of demand in response to our favourable rates offered in Vienna and the great feedback received from Eurowings customers. Starting at the end of March we will add a large number of flight connections to our route network", says Robert Jahn, Managing Director of Eurowings Europe.

Six weekly flights to the metropolis of Birmingham
Birmingham, the second largest city in Great Britain, is now newly and regular accessible from Vienna. The German low-cost airline offers direct flight connections between Vienna and Birmingham six times per week in the summer 2017 flight schedule, deploying an Airbus A319 aircraft. The flight departs from Vienna on Mondays, Tuesdays, Wednesdays, Thursdays and Fridays at 5:45 p.m. and arrives in Birmingham at 6:45 p.m. The return flight from Birmingham leaves at 7:45 p.m. every day from Monday to Friday and lands in Vienna at 11:05 p.m

Numerous new flight connections in the summer flight schedule 2017
In addition to Birmingham, Madrid, flight service is regularly offered to Madrid, the capital of Spain and Nice, the port city in South Eastern France, starting in the summer of 2017, with six weekly flights operated to both destinations. Moreover, the summer 2017 flight schedule features numerous seasonal flight connections to popular vacation destinations. Eurowings takes off once a week to Mytilene in Greece, twice weekly to Santorini and Samos and three times each week to Kavala. Paphos in Cyprus is offered once a week and Italy has become more easily accessible thanks to the airline’s weekly flight to Lamezia Terme and flight service three times per week to Olbia and Brindisi. Furthermore, Eurowings has added Malta, Porto in Portugal and Ibiza in Spain to its route network, and offers bi-weekly flight service to all three destinations. The airline flies twice each week to Zadar, Croatia as of April 2017, which will be increased to three weekly flights as of May 3, 2017.


Quality flights at favourable rates
Eurowings offers the right flight for every occasion based on its broad offering of quality flights at favourable prices and different fare options. The German low-cost airline serves more than 130 destinations in Europe and throughout the world, for example the Dominican Republic, Cuba and Thailand. Further information and booking possibilities can be found on the Eurowings Website at www.eurowings.com.