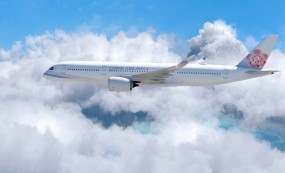 Vienna Airport: China Airlines the First Airline to Operate an Airbus A350 from Vienna
Effective immediately, China Airlines will deploy a new Airbus A350-900XWB aircraft on its three weekly flights between Vienna and Taipei. Thus China Airlines is the first airline to offer scheduled flight service to Vienna Airport on an Airbus A350. Within the context of a press briefing and photo shooting, Wei Wang, General Manager Austria, Central & Eastern Europe China Airlines, the new General Manager Austria, Central & Eastern Europe China Airlines Doris Chen and Nikolaus Gretzmacher, Head of Operations, Flughafen Wien AG, welcome the new aircraft in the presence of Ya-Ping Shih, the Taiwanese representative in Austria.
Airbus A350 in scheduled flight service at Vienna Airport for the first time
The Taiwanese national carrier China Airlines accepted delivery of its first Airbus A350-900XWB jet on September 30, 2016. The airline‘s A-350 fleet will grow to 14 aircraft by 2018. The new A350 will be deployed on three European routes operated by China Airlines. In addition to Vienna, the aircraft will also be used to serve Amsterdam starting at the beginning of January and Rome as of the beginning of February. The Airbus A350 of China Airlines features 32 Premium Business seats, 31 Premium Economy seats and 243 Economy eats, with the option of the comfortable family couch. Compared to other passenger jets, the cabin boasts a higher level of humidity, higher oxygen saturation during the flight, wider windows and adjustable LED lighting depending on the particular flight leg. All this combines to significantly increase passenger well-being on board.
China Airlines flies to more than 80 destinations around the world
China Airlines was founded in Taiwan in 1959, and has offered flight connections between Vienna and Taipei since the year 2005. China Airlines ranks among Asia’s largest airlines, serving more than 80 destinations across the globe. In 2016 a total of 14.7 million passengers around the world flew with China Airlines.
Information on China Airlines and booking possibilities are available at www.china-airlines.at.
Please address inquiries to the Press Office of Flughafen Wien AG Peter Kleemann, Company Spokesman
Tel.: (+43-1-) 7007-23000
E-mail: p.kleemann@viennaairport.com
Website: www.viennaairport.com www.facebook.com/flughafenwien PeterKleemannVIE
Download PDF deutschDownload PDF engl.Download Image