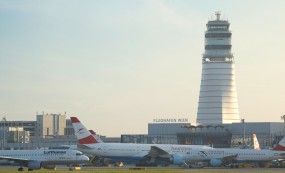 ·      Positive guidance confirmed for 2016: increase in revenue to € 725 million, EBITDA to € 310 million and the net profit for the period before non-controlling interests clean i.e. adjusted for Malta revaluation to € 115 million

·      Traffic guidance for 2016 for the Vienna Airport site also confirmed: passenger growth at the upper end of the projected range between 0% and 2%

“The Flughafen Wien Group is continuing its upward trend. All relevant financial performance indicators could be significantly improved in three economically strong quarters, featuring increases in revenue, EBITDA and the net profit for the period. Thanks to the consistent reduction of net debt, the 2016 target below the € 400 million mark has already been reached. The outlook is positive, and we expect to achieve our financial objectives for the entire year 2016. The Vienna Airport site is thriving, and the development of the Airport City is contributing greatly to this. Twelve companies have already decided to locate their operations at the flight hub, creating about 600 additional jobs”, explains Günther Ofner, Member of the Management Board of Flughafen Wien AG.

“In spite of crisis-related challenges, 2016 has been a record year for some individual destinations. Following the month of July, the strongest in terms of passenger volume (2,431,583 passengers), and the busiest day of the year in September (89,361 passengers), the 17.7 million passengers handled by Vienna Airport in the first nine months of 2016 comprises a new passenger record in the airport’s history. The month of October, which showed a 6.5% rise in the number of passengers, also developed very well, and we expect total passenger volume in 2016 to be at the upper end of the projected range between 0% and 2%. There are already new developments in the flight offering for 2017, with the addition of Los Angeles, the Seychelles and other destinations”, states Julian Jäger, Member of the Management Board of Flughafen Wien AG.

Good traffic results and business development at Malta and Kosice Airports
The foreign strategic investments of the Flughafen Wien Group in Malta and Kosice Airports continued to develop well. Malta Airport reported growth of 7.5% to reach a volume of 3,894,040 passengers in the first nine months of 2016. The most important markets for Malta Airport were Great Britain, Italy and Germany. Kosice Airport handled a total of 346,563 passengers in the same period, comprising a rise of 5.5% in a year-on-year comparison.

Significant improvement of financial performance indicators in Q1-3/2016
Revenue of the Flughafen Wien Group in the first nine months of 2016 rose 10.2% to € 545.4 million. In addition to the positive passenger development and higher income in the Handling Segment, the increase in revenue is mainly attributable to the full consolidation of Malta Airport as of the second quarter of 2016. With the conclusion of the transaction in which Flughafen Wien AG increased its shareholding in Malta Airport and the formal closing on March 30, 2016, the stake was subject to a revaluation and fully consolidated in the consolidated financial statements of the Flughafen Wien Group starting at the end of the first quarter of 2016.

Revenue and earnings development in the segments
Revenue of the Airport Segment climbed 3.1% in Q1-3/2016 from the prior-year period to     € 281.5 million. Segment EBIT improved by 34.4% to € 70.8 million (Q1-3/2015: € 52.7 million). The Handling Segment showed a 2.6% increase in revenue to € 116.6 million, and segment EBIT was up 5.2% to € 12.4 million (Q1-3/2015: € 11.8 million.). This includes the security services provided by VIAS as well as the handling services of Vienna Aircraft Handling (VAH). The Retail & Properties Segment reported a revenue decrease of 5.3% in the first nine months of 2016 to € 91.7 million. This decline is mainly due to the lower rental income relating to a special effect of a finance lease agreement in conjunction with the acquisition of Hermione, as well as the restrained development of parking and retail revenue. EBIT of the Retail and Properties Segment amounted to € 45.7 million (-2.9% from € 47.1 million in Q1-3/2015). The development of revenue in the Other Segments was stable, dropping slightly by 0.1% to € 11.7 million (Q1-3/2015: € 11.7 million). Segment EBIT showed a disproportionately high increase to € 58.0 million as a result of the revaluation of the stake held in Malta Airport. With the closing of the transaction on March 30, 2016, the strategic investment in Malta Airport now belongs to the group of companies which are fully consolidated in the consolidated financial statements of the Flughafen Wien Group. For this reason, these business results are reported as the new Malta Segment as of the second quarter of 2016. Revenue of the Malta Segment amounted to € 43.9 million in the second and third quarters of 2016, and the segment’s EBIT totalled € 21.8 million.

Investments
Of the total investments (excluding business acquisitions) amounting to € 69.0 million in the first nine months of 2016, € 23.9 million related to investments in the Runway System 11/29 (runway modernisation), € 8.0 million was for investments in connection with the 3rd Runway and € 2.4 million involved the renovation of an operations building. Total investments in the year 2016 are expected to be about € 95 million (excluding the business acquisition in Malta Airport). The following values were added to the consolidated balance sheet as of March 30, 2016 on a provisional basis from the acquisition of Group companies in connection with Malta Airport: € 61.3 million for goodwill, € 0.9 million for intangible assets and € 363.8 million for property, plant and equipment and investment property.

1)     Profit for the period attributable to the parent company

The report by Flughafen Wien AG for the first six months of 2016, from January 1 to September 30, 2016, is available to the general public at the company’s offices at 1300 Flughafen Wien and at Bank Austria, 1010 Vienna, Schottengasse 6-8. It is also available on the Internet at http://viennaairport.com/en/company/investor_relations/publications_and_reports/
quarterly_reports