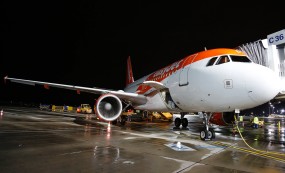 Yesterday, November 2, 2016, easyJet inaugurated a new flight service connecting Vienna Airport and Lyon. The British airline is offering three weekly flights to the French city, increasing the total of European cities it serves from Vienna to nine.  The new flight connection was officially inaugurated by Vienna Airport and easyJet with a ribbon cutting yesterday evening.

“The British airline easyJet is setting tremendous growth impulses at Vienna Airport, showing the highest passenger growth in 2015. That is why easyJet was also given the ‘Best Performing Airline’ award by Vienna Airport“, says Julian Jäger, Member of the Management  Board of Flughafen Wien AG. “With the new flight connection to Lyon, the British airline is increasing its weekly frequencies from Vienna to 45 flights. We also expect further growth impetus from easyJet at Vienna Airport in the future”, he adds. In addition to Lyon, easyJet already connects Vienna Airport to Amsterdam, Bristol, Edinburgh, Geneva, London-Gatwick, London-Luton, Manchester, Naples and Berlin-Schönefeld.

“This is an exciting perspective for easyJet to build and reinforce its network from the Austrian capital and we are happy to extend our portfolio offer with this second route to France. This new connexion will ease for an affordable fare the exchange between these two cities benefiting to local economy to both way of the route. This route will connect Vienna to a strong easyJet place as the airline is the number 2 operator in Lyon.” said Thomas Haagensen

Three times per week to Lyon
The new flight service to Lyon started on November 2, 2016, flying to the French city on Mondays, Wednesdays and Fridays. On Mondays and Wednesdays, the aircraft takes off from Lyon at 4:10 p.m. and is scheduled to arrive in Vienna at 6:10 p.m. It then departs from Vienna Airport on the return flight to Lyon at 6:50 p.m. and arrives in Lyon at 8:35 p.m. On Fridays, the aircraft leaves Lyon at 10:25 a.m., reaching Vienna at 12:30 p.m. The return flight from Vienna takes off at 1:05 p.m. before landing in Lyon at 2:45 p.m. Lyon is the capital city of the Region  Auvergne–Rhône-Alpes  and is the third largest city in the country after Paris and Marseille. In particular, Lyon is known for its old town, which along with Lyon peninsula was designated a UNESCO World Heritage Site in 1998, as well as its gastronomic scene, and is considered to be the gateway to Southern France.

About easyJet:
easyJet is Europe’s leading airline offering a unique and winning combination of the best route network connecting Europe's primary airports, with great value fares and friendly service. easyJet flies on more of Europe’s most popular routes than any other airline. easyJet carries over 70 million passengers annually, of which more than a fifth are travelling on business. easyJet flies over 255 aircraft on more than 820 routes to over 130 airports across 31 countries. More than 300 million Europeans live within one hour's drive of an easyJet airport. easyJet aims to be a good corporate citizen, employing people on local contracts in seven countries across Europe in full compliance with national laws and recognising their trade unions. The airline supports a number of local charities and also has a corporate partnership with UNICEF which has raised over £7m for the most vulnerable children since it was established in 2012. The airline takes sustainability seriously. easyJet invests in the latest technology, operates efficiently and fills most of its seats which means that an easyJet passenger's carbon footprint is 22% less than a passenger on a traditional
airline, flying the same aircraft on the same route. Innovation is in easyJet’s DNA – from our launch 20 years ago when we changed the way people fly to the present day where we lead the industry in digital, web, engineering and operational innovations to make travel more easy and affordable for our passengers.

Precise flight times and booking possibilities are available at www.easyJet.com.