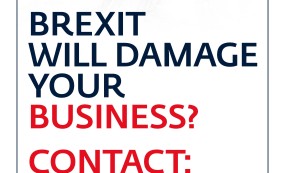 The Airport City at Vienna Airport is growing: several new companies with a total of about 450 employees have set up business operations at the airport site over the last few months. Following the “Brexit” decision by Great Britain, Vienna Airport with its Airport City is increasingly positioning itself as an attractive business park for internationally active companies. On the basis of its new advertising campaign in the Financial Times UK, Vienna Airport presents its advantages as an optimal business location for companies looking to be in close proximity to their markets in Eastern and Western Europe.

“Right now it is a good time for the Austrian business location to position itself as an attractive location partner, especially for British companies, and Vienna Airport is well-positioned in this regard. We offer the perfect commercial and traffic infrastructure and thus optimal conditions for firms requiring direct, effective international connections”, affirms Günther Ofner, Member of the Management Board of Flughafen Wien AG.

Airport City in the Financial Times UK
In order to promote these competitive advantages, Vienna Airport launched a separate Airport City advertising campaign in Great Britain on July 19, 2016. With four ads placed in the British edition of the Financial Times, the airport is targeting internationally active companies searching for new business locations following the “Brexit” decision on the part of Great Britain. Vienna Airport offers optimal pre-requisites for this purpose. Efficient connections to more than 180 destinations in over 70 countries, close proximity to the markets of Eastern and Western Europe with direct air, highway and long-distance train connections, as well as a well-developed commercial infrastructure are at the disposal of companies.

Considerable interest in the Airport City
Numerous companies have already seen these advantages, and decided in favor of a business location at the airport. For example, the transport company Kühne + Nagel relocated its operations center to the airport site. The airlines Eurowings and EVA Air as well as the machine supplier Titan Machinery have also set up business operations at the airport. The tool producer Makita and its logistics partner Cargo Partner also made the decision to locate their future operations centers on the airport premises.

140,000 m² commercial real estate at Vienna Airport
Vienna Airport offers optimal conditions for such companies. This includes commercial real estate of more than 140,000 m² in close vicinity to the airport, 84,000 m² of office space in the core area of the airport, modern conferencing possibilities and very good local amenities for employees including numerous shops and restaurants as well as a fitness center at the site. The NH Hotel located directly at the airport and the MOXY Hotel scheduled to open in 2017 ensure the sufficient availability of accommodations. The office offering will be expanded, with project preparations already underway for Office Park 4 at the airport.