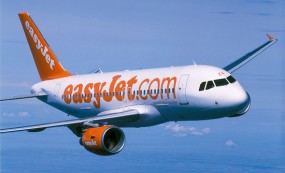 On June 2, 2016, Vienna Airport granted its Airline Award for the fourth time: The British carrier easyJet generated the highest absolute passenger growth at the Vienna hub in 2015. For this reason, Vienna Airport nominated easyJet the “Best Performing Airline.” The award ceremony took place on the occasion of the VIE Summer Event held on June 2, 2016.

“With our Airline Award, we acknowledge the special achievements of our customers who make a major contribution to the good development of the Vienna hub. Last year easyJet showed the biggest increase in passenger volume, which is why this year’s award is being given to the British airline”, says Julian Jäger, Member of the Management Board of Flughafen Wien AG.

Russ Smith, Ground Operations Manager Germany & Austria of easyJet, is pleased with the recognition granted by Vienna Airport, “We are really happy and proud to receive a prize from Vienna Airport rewarding the fastest growth on the platform in 2015. From a single route operator back in 2011 to London Gatwick we have become in a 5 year time a major actor on Vienna platform with 10 destinations and more than 300 000 passengers flew to and from Vienna in 2015. In 2016 easyJet plans to deploy in Vienna a capacity of more than 350 000 seats which means an increase of more than 80% compared to 2015. Our load factor also keeps on increasing year on year as a sign of our offer popularity to and from the Austrian capital. Thanks to our solid partnership with the airport and Vienna inhabitants positive welcome we aim to keep on increase Vienna connectivity to Europe in the years to come.”

easyJet is the ”Best Performing Airline“
The main reason for easyJet’s passenger growth was achieved by numerous additions to the airline’s flight offering from Vienna. Besides the existing connections from/to London Gatwick, Geneva and Rome, the airline expanded its route network by several new services from/to London Luton, Manchester, Bristol, London Schönefeld and Amsterdam. Moreover, easyJet launched flights to Edinburgh in February 2016 and to Naples in March 2016. In total, easyJet carries more than 66 million passengers per year. The airline’s dense route network includes 750 routes to 130 airports in 33 countries.

Numerous jubilees honored at the Summer Event
Within the occasion of the Airline Award ceremony, Vienna Airport also honored the excellent long-lasting business partnership with various airlines. The airport expressed its thanks to Aeroflot, which is represented at the airport since 60 years, followed by Turkish airlines that can look back at 55 years of great cooperation. Tunisair, Royal Jordanian and Egyptair were recognized for 40 years of successful partnership with the Vienna hub, whereas Eva Air and Luxair were honored for their 25th anniversary at Vienna Airport. Representatives of the airlines celebrated these milestones together with Vienna Airport and about 150 invited guests during this year’s VIE Summer Event held at the Novomatic Forum.