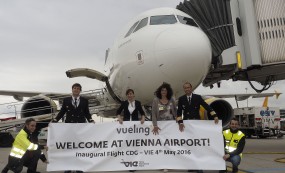 Effective immediately, Vueling is operating a new route from Vienna to Paris-Charles de Gaulle. The Spanish airline links Vienna to the French capital five times per week. On the occasion of the initial flight, the new service was officially inaugurated today, May 4, 2016 by Ulla Siebke, Country Manager Germany & Austria Vueling and Belina Neumann, Head of Aviation Marketing at Flughafen Wien AG.

“The French capital ranks as one of most visited cities in the world, and is an important economic and tourist center. The new direct flight connection makes Paris even more accessible”, says a pleased Julian Jäger, Member of the Management Board of Flughafen Wien AG.

Ulla Siebke, Vueling Country Manager of Germany and Austria, said: “Vueling connects Europe! We are happy to offer to our passengers another European city from Vienna Airport. Beside our existing routes to Barcelona and Rome, Paris will be a good complement for both corporate and leisure travelers that wants to fly enjoying efficient and innovative services for a very competitive price”.

Starting on May 4, 2016, Vueling operates five weekly flights connecting Vienna with Paris-CDG. The aircraft will depart Paris-CDG at 12:20 p.m. on Mondays, Wednesdays, Thursdays, Fridays and Sundays and land in Vienna at 2:10 p.m. The return flight will leave Vienna at 3:05 p.m. and arrive in Paris at 5:10 p.m.

Paris, France’s pre-eminent metropolis
Paris is the political, economic and cultural center of France. Each year, about 16 million foreign tourists travel to the large city on the Seine River, making Paris one of the most visited cities in the world. Sights such as the Eiffel Tower, Notre-Dame and the Louvre make the city a popular tourist destination. Parts of the Banks of the Seine are a UNESCO World Heritage Site. At the same time, the headquarters of UNESCO are located in the city.

About Vueling
Vueling started in Spain in 2004, operating two Airbus A320 aircraft on four routes. Today, the largest airline based at Barcelona Airport now operates more than 200 routes to 100 destinations throughout Europe, the Middle East and Africa, providing first-class service at outstanding prices. Vueling has 14 flight bases, and has carried more than 50 million business travelers and vacationers up until now. It ranks as one of the most punctual airlines in the world. More information can be found under www.vueling.com