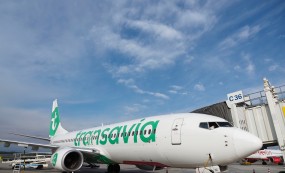 As of now, the airline Transavia is offering a new route from Vienna to Paris-Orly. The low cost airline, part of the Air France-KLM Group, will operate up to four weekly flights in April 2016 from Vienna and starting in May increases to a daily flight service to the French capital. The new flight connection was officially inaugurated by Hervé Kozar, CCO of Transavia, and Berlina Neumann, Head of Aviation Marketing at Flughafen Wien AG.

”We are very pleased to being able to offer a new flight connection to Paris in cooperation with Transavia,” says Julian Jäger, Member of the Management Board of Flughafen Wien AG, commenting on the flight service to Paris-Orly. ”Passengers can take advantage of an increased flight offering to France.”

Hervé Kozar, CCO of Transavia, is also delighted about the cooperation with Vienna Airport “We are very glad to offer daily scheduled services between Vienna and Paris Orly. By adding Paris to the existing route from Vienna to Rotterdam our capacity from Vienna has more than tripled compared to 2015 with a total of 164.000 seats. It is a pleasure to welcome more Austrian people on board and offer both leisure and business passengers an attractive price.”

Paris, one of the world’s most-visited cities
Paris is the political, economic and cultural center of France, and one of the most-visited cities in the world, attracting 16 million foreign tourists each year. The Paris metropolitan area registers 47 million guests from France and abroad, and more than 184 million overnight stays. Sights such as the Eiffel Tower, Notre-Dame and the Louvre make the city a popular tourist destination. Parts of the banks of the Seine are a UNESCO World Heritage Site, and Paris itself serves as  UNESCO headquarters.

About Transavia
Transavia, a member of the AIR FRANCE KLM Group, operates scheduled and charter flights to more than 110 destinations, primarily in Europe and Northern Africa. Transavia has 50 years of experience and is the accessible low-cost airline in Europe, leading in hospitality, service and digital services. Transavia offers an attractive basic price for both leisure and

business travelers with additional (paid) products and services. Transavia carries 11 million passengers a year and operates with a young and environmentally friendly fleet. Transavia offers flights from its seven hubs in three European markets; the Netherlands (Amsterdam, Rotterdam/The Hague, Eindhoven), and France (Paris, Nantes and Lyon) as well as from Munich in Germany.