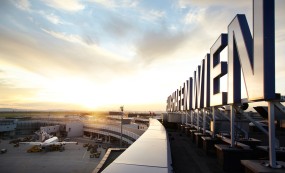 For the second straight year the rating agency Skytrax with a special focus on the aviation industry has given its award for the “Best Airport Staff in Europe” to Vienna Airport. This is a premiere in light of the fact that no airport has ever been able to defend this renowned championship. The award honors the service orientation, friendliness and competence of all employees in the passenger areas. This includes the staff in the terminal areas, security checkpoints, information counters and in the gastronomy and shopping facilities. The awards granted by Skytrax are of great importance in the industry due to the large number of surveyed passengers. More than 13.2 million travelers were interviewed around the world for this year’s awards, and asked about their judgment of the infrastructure and staff at 555 airports. This prize, which was bestowed in Cologne on Wednesday, March 16, 2016 within the context of the Passenger Terminal Expo 2016, is already the fifth award given to Vienna Airport for its excellent service quality within a period of just one year.

“We are extremely pleased that we have been able to convince passengers that we have the best airport staff in Europe for the second time in a row,” says Julian Jäger, Member of the Management Board of Flughafen Wien AG, who considers the award as confirmation of the strategy pursued by the airport. “This fantastic recognition by millions of passengers around the world underlines the success of our strategy designed to improve service quality and orientation on the basis of hundreds of small and more far-reaching measures.” Of course, according to Julian Jäger, all employees of Flughafen Wien AG and all employees of the company’s business partners at the Vienna Airport site deserve the credit for this award. “Their high level of competence and commitment are the key factors underlying the outstanding quality of service at the airport again this year.”

Five awards for service quality in one year
The “Best Airport Staff in Europe” award in 2016 is the fifth one for service quality granted to Vienna Airport over the last twelve months. After receiving the “Best Airport Staff in Europe“ prize last year, it was also given the “4-Star Airport“ ranking, also by Skytrax. The Austrian Association in Support of the Blind and Visually Impaired honored the high level of commitment of the airport with respect to barrier-free access by bestowing the “Beryll Award”. Airport Council International (ACI), the association representing the international aviation sector, also gave an award to Vienna Airport for its “Airport Service Quality.”

More information is available at: http://www.worldairportawards.com