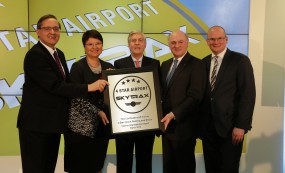 
A high level of recognition for Vienna Airport: The renowned market research institute Skytrax awarded the title of “4-Star Airport” to Vienna Airport. Today, February 24, 2016, the award was presented at an official ceremony held at Vienna Airport. Edward Plaisted, CEO of Skytrax, congratulated Günther Ofner and Julian Jäger, the Members of the Management Board of Vienna Airport, in the presence of Erwin Pröll, Governor of the Federal Province of Lower Austria and Renate Brauner, Executive City Councilor of the City of Vienna. Only ten airports in Europe have been granted this distinction. Vienna Airport is now in the European Premier League of airports.

In his statement, Erwin Pröll, Governor of the Federal Province of Lower Austria, emphasized the fact that he was very pleased with the positive development of the airport and the important role it plays as an employer. “With its 20,000 employees, the airport site is a vital engine of the economy creating many new jobs in the region. The 4-Star rating massively upgrades the value of the airport location.”

Renate Brauner, Executive City Councilor of the City of Vienna, focused on the key role of Vienna Airport for tourism and the economy. “The airport is the gateway to the world for the business location of Vienna, and an important calling card for local tourism. The 4-Star rating underlines the high quality which Vienna Airport offers to its travelers and thus our guests.”

Edward Plaisted, CEO of Skytrax, is delighted to be able to welcome a new airport to the distinguished group of 4-Star airports. “We were convinced by the quality of Vienna Airport thanks to its pronounced service orientation and modern infrastructure. We are happy to welcome Vienna Airport to the league of European 4-Star Airports.”

For Günther Ofner and Mag. Julian Jäger, Members of the Management Board of Flughafen Wien AG, the rating confirms the successful service strategy of the airport. “The granting of the 4-Star Airport rating demonstrates that our service initiative is valued equally by both passengers and international experts. We are very pleased to receive this award, and will resolutely continue with our strategy of improving the quality of our service.”

Various quality factors were analyzed
The basis for receiving the “4-Star” ranking was an evaluation by an international team of Skytrax experts over a period of several days. Skytrax assessed and rated the quality of service, the terminal infrastructure, the shopping and gastronomy offering and useful services for the benefit of passengers. Over the past few years Vienna Airport has achieved much within the context of a service initiative. For example, a new guidance system was introduced, along with barrier-free information monitors, special services for families including the Family Fun Gate and family security checks, special service counters and electronic waiting time displays at the security checkpoints along with other services. The airport is continually working on expanding and upgrading its offering.

Only ten “4-Star Airports“ in Europa
With its 4-Star Airport rating, Vienna Airport is at the same quality level as nine other European airports. Accordingly, Amsterdam Schiphol, Barcelona El Prat, Copenhagen, Dusseldorf, Frankfurt, Helsinki, London Heathrow, Paris Charles de Gaulle and Zurich are also represented in the ranking. There are a total of 35 “4-Star Airports” around the world, including large sites such as Abu Dhabi International Airport and Kuala Lumpur International Airport. Only five airports across the globe have been rated as “5-Star Airports,” of which only one, namely Munich Airport, is located in Europe.

Already the second award from Skytrax
The 4-Star Airport seal is already the second Skytrax award given to Vienna Airport. In the spring of 2015, Vienna Airport was recognized for the “Best Airport Staff in Europe.” A global survey of more than 13 million travelers evaluated the service orientation and quality of service of all employees in passenger-related areas, such as in the terminal, at security checks and information desks, in the shopping and gastronomy facilities and many other customer-oriented interfaces. More than 550 airports around the world were assessed.

Skytrax: internationally renowned market research institute for the aviation industry
The market research institute Skytrax has been implementing global quality rankings for international airports and airlines since 1990. In particular, Skytrax places great emphasis on service quality, comfort, safety and security and many other criteria. The annual surveys of the institute are considered to be globally recognized passenger studies of the aviation industry.