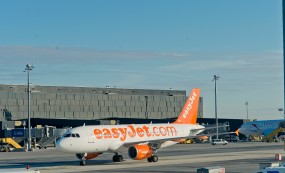 Since the beginning of the winter flight schedule, easyjet has been offering new flight connections originating in Vienna. Recently the airline commenced flight service to London Luton, Manchester, Bristol (England) and Berlin Schönefeld (Germany). As of December 17, 2015, easyJet is also adding flights to Amsterdam in its route network from Vienna. It has already announced plans to offer flights to Edinburgh (Scotland) and Naples (Italy) in 2016. The new frequencies were presented at a press briefing today, December 10, 2015.

“In 2015 easyJet flew 551 000 passengers to and from Austria and 302 000 to and from Vienna. This year is definitely a key date for the development of easyJet here in Vienna. Indeed, we have launched seven new routes supported by a high demand from our customers: Edinburgh, Manchester, Bristol, Amsterdam, London Luton, Berlin and Naples. With a total of ten routes to and from the Austrian capital, easyJet will strongly contribute to the local tourism industry connecting the city to Europe and under-served European regions from Vienna”, says Thomas Haagensen, Country Director Germany easyJet Deutschland.

“easyJet is one of the most renowned low-cost carriers in Europe, and we are very pleased about the new flight offering from Vienna including seven additional routes. Moreover, Berlin Schönefeld and Bristol represent two completely new destinations accessible from Vienna2, says Julian Jäger, Member of the Management Board of Flughafen Wien AG.

“Germany is Vienna’s most important target market, whereas Italy and most recently Great Britain are both now in Vienna’s top five markets”, explains Norbert Kettner, Managing Director of the Vienna Tourist Board. “The new flight connections will serve to enhance frequencies for easyJet, Vienna Airport and last but not least, for tourism in Vienna. We have added an important building block towards attaining Vienna’s strategic objective by 2020 of strengthening growth in tourism growth on the basis of new direct flight connections.”

Total of seven new easyJet destinations from Vienna
On October 23, 2015, easyJet began to link Vienna with London Luton every Monday and Friday. Flights to Berlin Schönefeld commenced on October 26, 2015 on Mondays, Thursdays, Fridays and Saturdays. Since the beginning of November 2015 easyJet has been offering flight service to Manchester every Tuesday, Thursday and Sunday and to Bristol on Mondays and Fridays. Beginning on December 17, 2015, the airline will connect Vienna with Amsterdam by operating four weekly flights on Mondays, Thursdays, Fridays and Sundays. In February 2016 easyJet will offer flights to Edinburgh, and also link Vienna with Naples starting with the summer flight schedule at the end of March.

easyJet offers flights to 33 countries throughout Europe
Each year more than 66 million passengers fly with easyJet, of which 12 million are business travelers. easyJet operates a fleet of more than 230 aircraft, offering 750 routes to 130 airports in 33 countries. More than 300 million people in Europe live within one hour of driving time from an easyJet airport, more than any other airline.

Precise flight times and booking possibilities are available at www.easyJet.com.