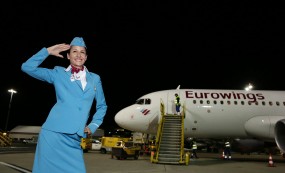 Starting today Eurowings is offering new flight connections from Vienna. The airline will operate direct flights from the Austrian capital to the destinations of Barcelona, London-Stansted and Palma de Mallorca. The new flight service was officially inaugurated on the occasion of the initial flight from Vienna to London-Stansted within the context of a ribbon cutting ceremony with Michael Knitter (COO Eurowings) and Max Kownatzki (Managing Director Eurowings Europe) as well as Julian Jäger (Member of the Management Board of Flughafen Wien AG) and Norbert Kettner (Managing Director Vienna Tourist Board).

New from Vienna: Eurowings
Based on the model of the successful airline Germanwings, the new independent low cost airline network has been established under the brand name Eurowings. This airline is commencing flight service in the fall of 2015 and will offer flights in Europe and to attractive long-haul destinations in the future.

Eurowings comprises Lufthansa’s new point-to-point brand. The Eurowings network is designed to become one of Europe’s leading low cost carriers, with point-to-point offerings in Europe as well as intercontinental flights originating in Europe. For this purpose wwo Airbus 320 aircraft will be stationed in Vienna.

“With Eurowings we have a new carrier launching flight service from Vienna, and we look forward to the cooperation with the airline. As a result, our passengers will have new attractive flight offerings to interesting travel destinations to choose from”, says a pleased Julian Jäger, Member of the Management Board of Flughafen Wien AG.

For Norbert Kettner, who heads the Vienna Tourist Board, the new airline represents “extremely welcome and effective support in implementing the Vienna 2020 tourism strategy- There is little which promotes a destination more than increasing accessibility by air travel“.

Daily flight service to Barcelona, three weekly flights to Palma de Mallorca
Starting today Eurowings will operate seven weekly flights to Barcelona. The aircraft departs from Vienna at 12:10 p.m. and arrives in Barcelona at 2:30 p.m. The return flight leaves Barcelona at 3:10 p.m. and lands at Vienna Airport at 5:35 p.m. local time. Three flights each week will be offered to Mallorca as of tomorrow, November 10, 2015. The aircraft will take off from Vienna at 6 a.m. and arrive in Palma de Mallorca at 8:25 a.m. The return flight is scheduled at 9:05 a.m., with a planned landing in Vienna at 11:30 a.m.

Six times per week to London-Stansted effective immediately – Nine flights as of January 2016
Eurowings will offer flight service to London-Stansted six times a week for the time being, to be expanded by two additional flights as of the beginning of December 2015 and three additional flights starting in January 2016. This means a total of nine flights each week will be offered to the British capital as of January 2016. An Airbus A320 will depart from Vienna every Monday, Tuesday, Wednesday, Thursday, Friday and Sunday at 6:15 p.m. and arrive in the British capital city at 7:25 p.m. local time. The return flight from London-Stansted will take place at 8:05 p.m., arriving in Vienna at 11:10 p.m. In addition a Eurowings aircraft will also depart from Vienna towards London-Stansted at 6:25 a.m. on Mondays, Wednesdays and Fridays, landing at 7:35 a.m. The flight back is scheduled to depart at 8:25 a.m. and arrive in Vienna at 11:30 a.m.

The newly inaugurated flight service will deploy an A320-200 aircraft of Eurowings Germany.