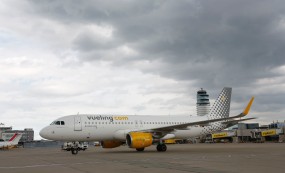 Vueling increases total capacity during the summer season to more than 149,600 seats for direct flights from Vienna to Barcelona and Rome.

Starting on May 1, 2015, the Spanish airline Vueling began to offer direct flights from Vienna Airport to Rome-Fuimicino. The total capacity for this route during the upcoming season will reach 63,360 available seats. The new route was officially opened today, May 4, 2015, within the context of a maiden flight event in the presence of Ulla Siebke, Country Manager Germany & Austria Vueling, and Julian Jäger, Member of the Management Board of Flughafen Wien AG.

“The new connection expands the flight offering from Vienna to the Italian capital and makes the destination even more accessible for our passengers“, says a pleased Julian Jäger, Member of the Management Board of Flughafen Wien AG in commenting on the newly inaugurated flight service to Rome.
“Rome Fuimicino is our second hub after Barcelona El Prat Airport, and we are very satisfied that we can now offer the region and even bigger variety of travel destinations“, explains Ulla Siebke, Country Manager Germany & Austria Vueling.

After a 90 minute flight to Rome, passengers from Vienna can transfer to 53 other direct flight connections. Vueling offers flights from the Italian capital city to Catania, Palermo, the Greek islands and many destinations in Croatia such as Dubrovnik and Split. In addition to the new route to Rome, Vueling will also fly once a day to Barcelona. With Vueling passengers can take connecting flights to up to 140 further destinations, including Mallorca, Ibiza, the Canary Islands and destinations in Africa such as Banjul, Accra and Dakar. Tickets for flights on the new route to Rome are available on the Vueling Website starting at € 43.68 for a one-way flight. Vueling operates an Airbus A320 departing Rome daily at 1:45 p.m. and landing in Vienna at 3:30 p.m. The return flight to Rome leaves Vienna at 4:10 p.m. and arrives in Rome at 5:40 p.m.

Vueling in Austria
Thanks to the new Vienna-Rome route, the number of seats offered by Vueling this summer will increase to 149,600, a rise of 75 percent compared to the summer of 2014. In the summer of 2009 Vueling started flying from Vienna to Barcelona, and has been offering flight service on two routes since May 2015, namely Vienna-Barcelona and Vienna-Rome.

Pioneer in innovations
Vueling and Pepsi are cooperating for the first time. The joint “Vueling by Pepsi” project enables the airline to install electrical connections on 60 aircraft within the next five years. As a result, Vueling will become Europe’s first low-cost carrier to offer this technological innovation.

In 2009 Vueling was the first airline to offer a smart phone application to book flight tickets. Six years later Vueling introduced other improvements in order to make travelling even more pleasant for its customers. Vueling’s smart phone channel is one of the services most highly rated by customers. Some two million customers have already downloaded the app, which is used an average of 1.5 times per user each month.

Other future-oriented innovations include Vueling’s being the first airline in the world with a geolocalization app for the Apple Watch. It is also the first airline with a “portable” boarding pass which can be uploaded on the Sony Smartwatch 2. The “Flight Status Manager” informs travelers in real time about the arrival and landing of Vueling flights. Moreover, Vueling is the world’s first carrier to use “contactless technology” for the payment process.

About Vueling
Vueling started in Spain in 2004, operating two Airbus A320 aircraft on four routes and with the objective of offering excellent service at competitive prices. Ten years later, the airline now operates 325 routes to 160 destinations throughout Europe, the Middle East and Africa. Vueling operates more than 100 aircraft from 22 flight bases, and up until now has carried more than 100 million passengers.