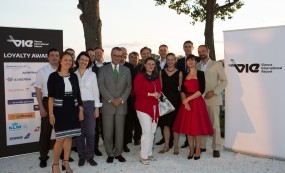 Vienna Airport granted its Airline Award for the second time. This year’s award for the “Best Performing Airline” was bestowed on Turkish Airlines. The Turkish airline succeeded in increasing its passenger volume by 35.1% in 2013, transporting close to 500,000 passengers during the year. Accordingly, Turkish Airlines was the fastest growing airline at Vienna Airport. The carrier has been offering flight service from Vienna to Turkey since 1961. In 2013 Turkish Airlines expanded its offering to Istanbul to five daily flights.

“2013 turned out to be an extremely successful year for Turkish Airlines in Vienna, featuring a passenger volume of over 490,000 passengers arriving in or departing from Vienna. This comprises a growth rate of over 30% from the previous year. We are very proud of this increase, which far surpasses the global growth of the company. It could only be achieved on the basis of an extraordinary amount of work on the part of all employees of Turkish Airlines in Vienna. This year we have defined the goal of once again surpassing our performance in the prior year, and exceeding the passenger threshold of 500,000 passengers to and from Vienna. We are confident that we will be able to reach this magical number”, said Yusuf Kurt of Turkish Airlines in thanking Vienna Airport for the award.

13 airlines honored for longstanding loyalty
In addition to the award for the “Best Performing Airline“, Vienna Airport also honored 13 other airlines which have been offering flight service from Vienna Airport without interruption since 1957, namely Aeroflot, Air France, Alitalia, Austrian Airlines, British Airways, Brussels, El Al, Air Serbia (previously JAT), KLM, LOT, Lufthansa, Swiss and Tarom. These airlines have connected the airport with destinations in Europe, Asia and North America since this time. Together with Vienna Airport and some 150 guests, representatives of the distinguished airlines celebrated at an evening event in the “wake up” restaurant located on the New Danube.