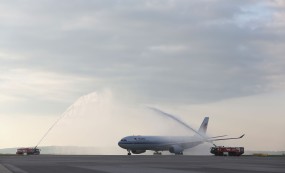 Vienna Airport welcomes a new connection to Asia starting on 5 May 2014: This morning at 6.10 am, the first A330-300 flight by Air China from Peking landed in Vienna. It was welcomed with a water salute ceremony on the apron and a reception in the General Aviation Center, which was attended by Feng Run´e (Vice President of Air China), Zhao Bin (Ambassador of the People’s Republic of China in Austria), Julian Jäger (member of the Management Board of Flughafen Wien AG) as well as Chang Kai (Director of the Chinese Cultural Association in Austria) and Fan Jingma (star tenor from China). At 7.30 am, the aircraft departed for the continuing flight to Barcelona. Tomorrow evening, on 6 May 2014, the official ceremony for this new flight connection will be held as part of a musical ceremony in the Liechtenstein Palace.

Feng Run´e Vice President of Air China says: “Twenty-two years ago, Air China used to have flights to Vienna. Today, the long history of Europe, the growing of the European Union and the irresistible charm of Vienna bring us back. I believe that the re-union of Air China and Vienna will make our partnership tighter, stronger and more fruitful.”

“The flow of traffic between Asia and Europe is expected to grow at an increasing rate in the future. Expanding our long-haul offering is therefore one of our strategic goals and, together with our partners, we are continuously working to attract new carriers to Vienna. The introduction of this new route by Air China shows that we are on the right course. The new connection will bring important growth impulses for the economic and tourism sectors in China and Austria“, indicated Julian Jäger, member of the Management Board of Flughafen Wien AG.

Four-times per week to Peking
Air China will operate four weekly flights on the Peking – Vienna – Barcelona route. Every Monday, Thursday, Friday and Sunday, the aircraft will depart from Peking at 2.10 am and land in Vienna at 6.10 am. At 7.30 am, the flight continues to Barcelona, with landing scheduled for 9.25 am. In the return direction, the machine will depart from Barcelona at 11.25 am and land in Vienna at 13.25 pm. The take-off from Vienna for Peking is scheduled for 2.55 pm, where the flight will land at 5.55 am the next morning.

Award-winning Star Alliance partner with high service quality
Air China was founded in 1988 and has more than 460 aircraft that service over 280 connections to 145 cities in 29 countries throughout the world. As part of the Star Alliance network, Air China is continuously expanding its offering to destinations in Europe. The airline currently operates more than 100 flights each week to European cities like London, Paris, Frankfurt, Rome and Madrid. Numerous awards from Skytrax, IATA and many other institutions underscore the high service quality and excellent passenger comfort provided by Air China. For additional information and reservations, see www.airchina.de.